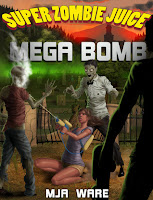 SUPER ZOMBIE JUICE MEGA BOMB
by MJA Ware
CG Press, LTD, 2011
ISBN: 9781466355019
Grades 4-8
Reviewed from copy provided by author.
All opinions expressed are solely my own.
Summary is from Goodreads.

After a failed attempt at running away, best friends Nathan and Misty return home expecting to face angry parents. Instead, they discover the military has destroyed the bridges out of their rural town and everyone's fled--except a small horde of the living dead. The stress of flesh-eating zombies may be more than their already strained relationship can handle.

Even with the help of the town geek and lemonade-powered Super-Soakers, there's not enough time to squeeze their way out of this sticky mess. Unless the trio eradicates the zombie infestation, while avoiding the deadly zombie snot, the military will blow the town, and them, to pulp.

Their only shot is something with a lot more punch. Something like the Super Zombie Juice Mega Bomb. But even if their friendship survives, there's another problem: Someone has to lure the undead into the trap.

I had mixed feelings about reading this book. On the one hand, I'm not a big fan of monster/zombie themed books.  On the other hand, it sounded like a book reluctant readers might like and I am always on the lookout for books to entice them to read. So, I picked up the book and read it.


I was pleasantly surprised by this book.  Yes, it does involve zombies which provided a strong gross element to the story, but the interactions between the characters also added a humorous element that balanced out the monster survival part of the story. Nathan and Misty's relationship undergoes some interesting changes throughout the story as they deal with not only the zombie but the challenges of growing up and changing feelings.  Nathan sounds exactly like a teenage boy, so much so that I had to laugh at times at how clueless he was.  The parts about Nathan and his father's prize car are very entertaining.  I also loved the idea of lemonade being used as a weapon, I thought that was very clever.


I did feel like the ending was a bit abrupt and left some of the storyline hanging (relationship between Nathan and Misty) I think the book which is plot heavy will definitely appeal to reluctant readers.  The action begins in chapter one and doesn't let up until the very end.  While there is some character development, the focus is one the plot, which is for many children, the most important thing.  For myself I would have enjoyed more character development, but I don't think most child readers will care that much.


Overall, I would say that this book would work well for reluctant readers who want something creepy without being too scary.  Although the two short stories at the end were very creepy, at least I found them to be so.  I've found though that many children are not as easily creeped out as I am. I will definitely be adding this to my school library.