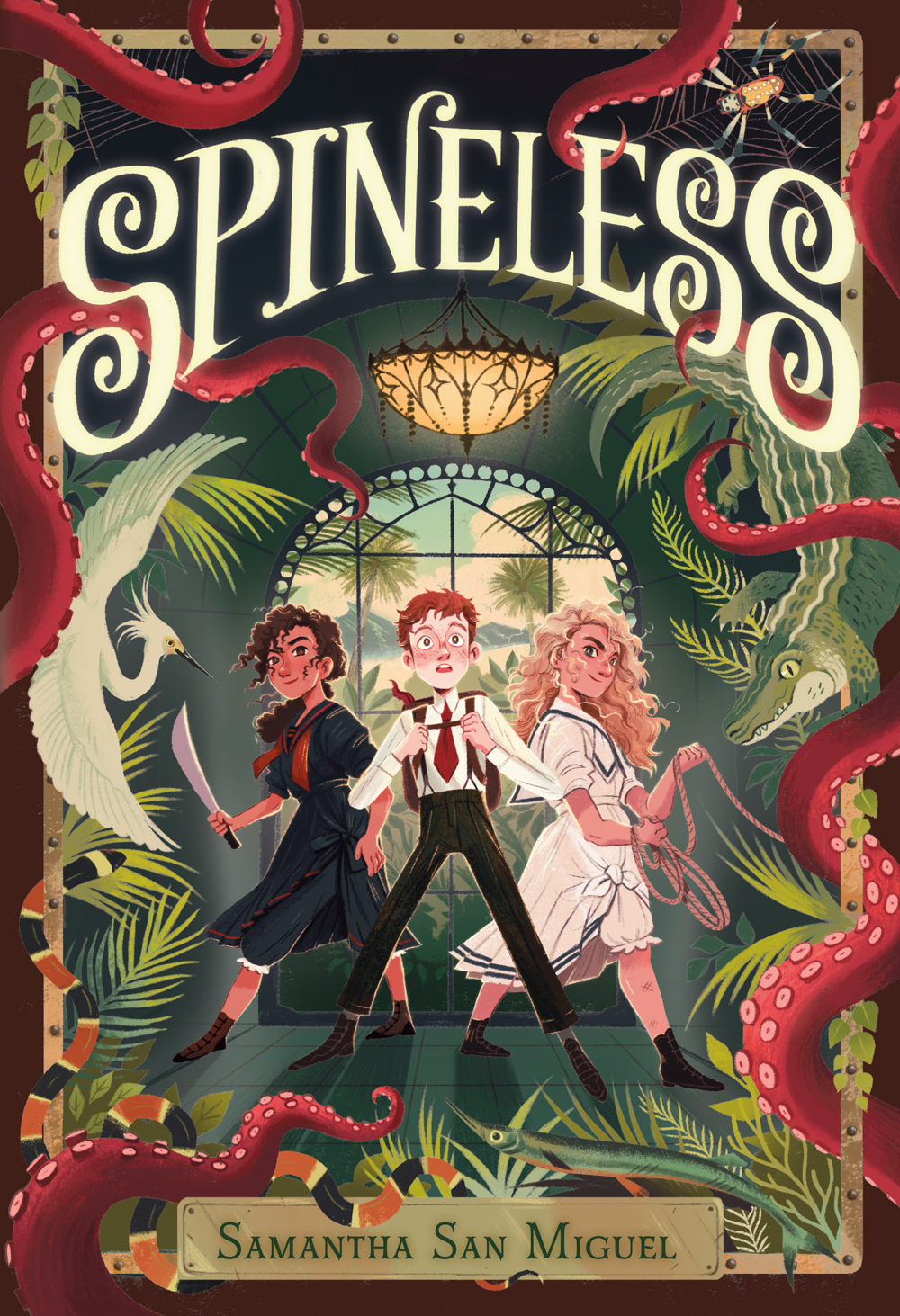 SPINELESS
by Samantha San Miguel
Union Square Kids, 2022
ISBN: 978-1-4549-3762-3
Source: publisher for review (Thanks!)
Ages 9-12
All opinions expressed are solely my own.
Book cover & summary provided by Goodreads.com & publisher.
ABOUT THE BOOK
This exciting middle-grade adventure is Hoot for the Gilded Age—with scientific discoveries, secret plots, and surprisingly enormous fauna.
When his asthma lands him at a health resort in the wilds of Gilded Age South Florida, twelve-year-old Algie Emsworth is over the moon. The scientific treasure trove of unexplored swamps may launch his dream career as a naturalist. But even Algie is startled when he happens upon a brand-new species and her brood in the karst springs surrounding the resort. Algie quickly realizes he must keep his discovery a secret: a famous collector of exotic animals is also staying at the hotel, and the new species is threatened by his very presence. An apparent curse has also descended upon the hotel, bringing with it a deadly red tide. But when the pool starts filling with ink and guests start getting mysterious, sucker-shaped wounds, Algie must pluck up his courage to find the truth about the goings-on at the Grand Hotel—and save the new species from destruction.
REVIEW
Spineless, a middle grade adventure story, sends readers into a Florida swamp during the late 1800s.  Algie Emsworth eagerly anticipates his family's arrival at a health resort set amidst Floridian wetlands.  His dream of being a naturalist seems within reach, especially with his overattentive mother distracted by the 'modern' craze of spooky tours.  But within moments of arriving, Algie almost drowns rescuing an octopus, and is abandoned in the swamp by the resort's owner.  After being rescued by the resort owner's daughters, Frankie & Lulu, Algie realizes that he might be in over his head.  Especially with his asthma just waiting to attack.  But with the guidance of Frankie & Lulu, Algie heads into the swamp where he makes a discovery he never could have imagined.  But the presence of an animal collector, the deadly red tide wreaking havoc on the local marine wildlife, and an annoying brother and his crush, an acrobatic performer, Algie seems to be in way over his head.
This fast-moving tale of adventure and discovery not only takes readers into the heart of a Florida swamp, but into the excitement of the natural world.  But as Algie learns, discovery is about much more than just finding something cool, it's about making difficult decisions about what's best for the animal.  While I classify this book primarily as an adventure story, it's also got elements of steampunk (technology in the past--Frankie & Lulu have quite the setup) and speculative fiction.  While there is some character development as Algie learns to appreciate his family more as well as become more independent, the strength of the book lies in the fast-moving plot full of cliffhanger moments.  With each chapter ending on a cliffhanger of some sort, the book pulls readers along.  Frankie & Lulu were great characters as their adventurous nature and experience balanced out Algie's weaknesses and lack of practical experience.  These girls had the freedom to explore and they took full advantage of it.
Overall, I found this to be an enjoyable adventure full of fascinating natural details.  Middle grade readers that enjoy a mix of adventure, technology, and a touch of fantasy will find a great deal to like in Spineless.
2022 books middle grade adventure Middle Grade Speculative middle grade steampunk