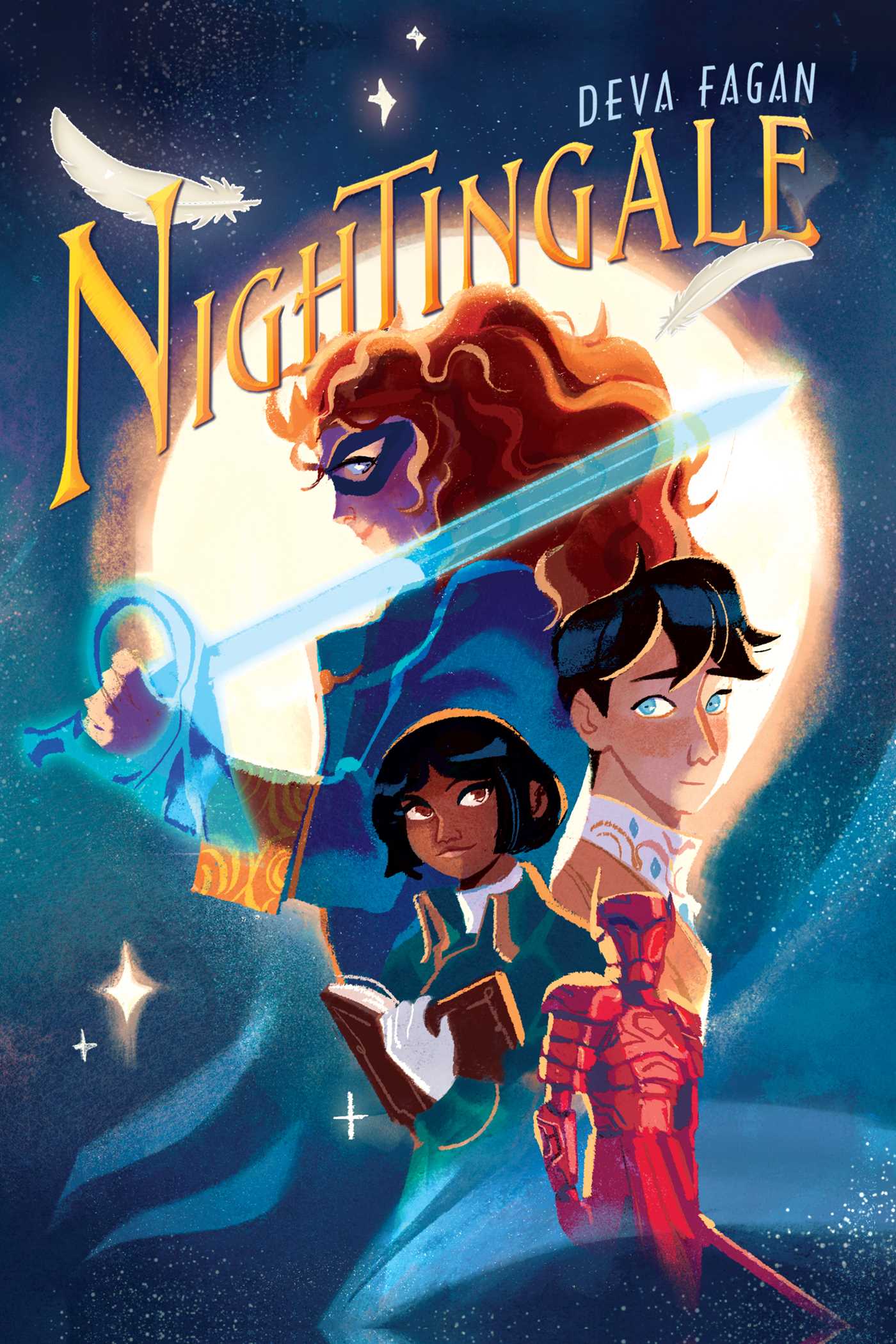 NIGHTINGALE
by Deva Fagan
Atheneum Books for Young Readers, 2021
ISBN: 978-1-5344-8134-3
Source: ARC from author for review
Ages 9-12
All opinions expressed are solely my own.
ABOUT THE BOOK
A plucky orphan girl stumbles into a conflict centuries in the making in this thrilling middle grade fantasy about unexpected heroes, the power of friendship, and one boisterous enchanted sword.

Twelve-year-old Lark is determined to escape her squalid life at Miss Starvenger’s boarding house, but she needs to find the coin to do it. Her grand scheme? To steal her fortune from the Royal Museum.

Unfortunately, her heist goes off the rails, and Lark ends up stealing a magical sword right out from under the nose of Prince Jasper, who’s none too happy to have his plans thwarted. Lark soon discovers that the Sword has a mind of its own, and has chosen her to be the next Nightingale, a fabled hero who must vanquish an ancient evil that is waking after centuries of sleep.

Working alone has its limitations, but relying on others after a lifetime of disappointments feels impossible. Still, Lark will need the help of her boarding house roommates if she wants to defeat the villainous forces that threaten to dismantle everything she holds dear.
REVIEW
Fagan has created a fascinating story that combines storylines involving social justice and protest, superheroes and villains, and the importance of friendship.  Lark, a twelve-year-old orphan girl, lives at a boarding house with five other girls.  All are mistreated and bullied by the owner of the boarding house, Miss Starvenger.  One night, Lark sneaks out to steal a few knick-knacks from the Royal Museum.  What she didn't count on was running into Prince Jasper who's bringing a magical sword back to life.  In her efforts to escape, Lark ends up fleeing with the sword. It turns out the sword used to belong to a superhero named Nightingale, and the sword has chosen Lark to be the next Nightingale.  Lark isn't pleased about this because she has no desire to be anybody's hero.  She just wants to survive without getting attached to anyone.
But between the sword itself and Prince Jasper's efforts to get the sword back, Lark has a couple of mishaps.  Finally, when it becomes apparent the sword has chosen her, Lark agrees to work with Prince Jasper, but only for money.  Things get more complicated as Lark's roommate Sophie is helping the local factory union to protest the conditions that are leading workers to 'ghost' (slowly disappear) because of the dangerous nature of the ore they are processing in the factory.  Lark tries not to care about her roommates, but she slowly realizes that she cares despite herself.  As she and Jasper work together, she begins to realize that helping others carries rewards and responsibilities she couldn't have predicted.
She and Jasper discover that a plot exists to recreate the Crimson Knight which nearly destroyed their country years earlier.  As they work to find out who is behind the plot, Lark comes to recognize the value of working with others.  Without the help of Jasper and her roommates it's likely to be impossible to defeat the Crimson Knight and the villains behind the plan to start another war.
Fagan has written a compelling story with great characters, interesting plot details, and thought-provoking themes. She even manages to give the magic sword a personality.  The relationship between the reluctant Lark and the enthusiastic sword makes for some amusing and initially disastrous events.  The work of Sophie and the union makes for an interesting side plot, as they work for better conditions in the factories and mines that produce the substance that allows magic and science to move forward.  I thoroughly enjoyed this story that mixed elements of social justice, superhero action, and solid relationship-building.
2021 books 2021 favorites middle grade fantasy Middle Grade Favorites Middle Grade Speculative