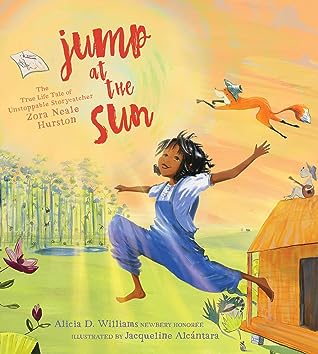 JUMP AT THE SUN
The True Life Tale of Unstoppable Storycatcher Zora Neale Hurston
by Alicia D. Williams, illustrated by Jacqueline Alcantara
Atheneum Books for Young Readers, 2021
ISBN: 978-1-5344-1913-1
Source: publisher for review
Grades 2-5
All opinions expressed are solely my own.
ABOUT THE BOOK
A picture book that shines the light on Zora Neale Hurston, the writer and storycatcher extraordinaire who changed the face of American literature.

Zora was a girl who hankered for tales like bees for honey. Now, her mama always told her that if she wanted something, “to jump at de sun”, because even though you might not land quite that high, at least you’d get off the ground. So Zora jumped from place to place, from the porch of the general store where she listened to folktales, to Howard University, to Harlem. And everywhere she jumped, she shined sunlight on the tales most people hadn’t been bothered to listen to until Zora. The tales no one had written down until Zora. Tales on a whole culture of literature overlooked…until Zora. Until Zora jumped.
REVIEW
This lovely book depicts the life of famed storyteller Zora Neale Hurston and how she became a writer as well as a storyteller.  Being a picture book, Hurston's complete life story can't be told, but Williams does a fantastic job in choosing which elements of her life to include.  The text wonderfully tells how Zora loved listening and telling stories from a young age.  She'd hang around the general store as long as possible in order to listen to the tales being swapped by the locals.  I found it especially entertaining that she liked to hitch rides with people traveling through town and tell them stories.  The beautiful language sweeps the reader right along with Zora as she's told to "jump at de sun" by her mother, but left to do so on her own after her mother's death.  Williams clearly shows how hard Zora had to work to get off the ground and reach for the sun of her dreams.  On her own at fourteen, Zora struggled to support herself and her dreams.  Yet somehow she managed to pull it off.  Alcantara's gorgeous illustrations beautifully compliment William's image-filled text.  Zora's enthusiasm and zest for life shine through in both the text and the illustrations.  One of the best picture book biographies I've ever read.  The book also has an author's note with additional information as well as additional reading and source information.  Highly recommended. 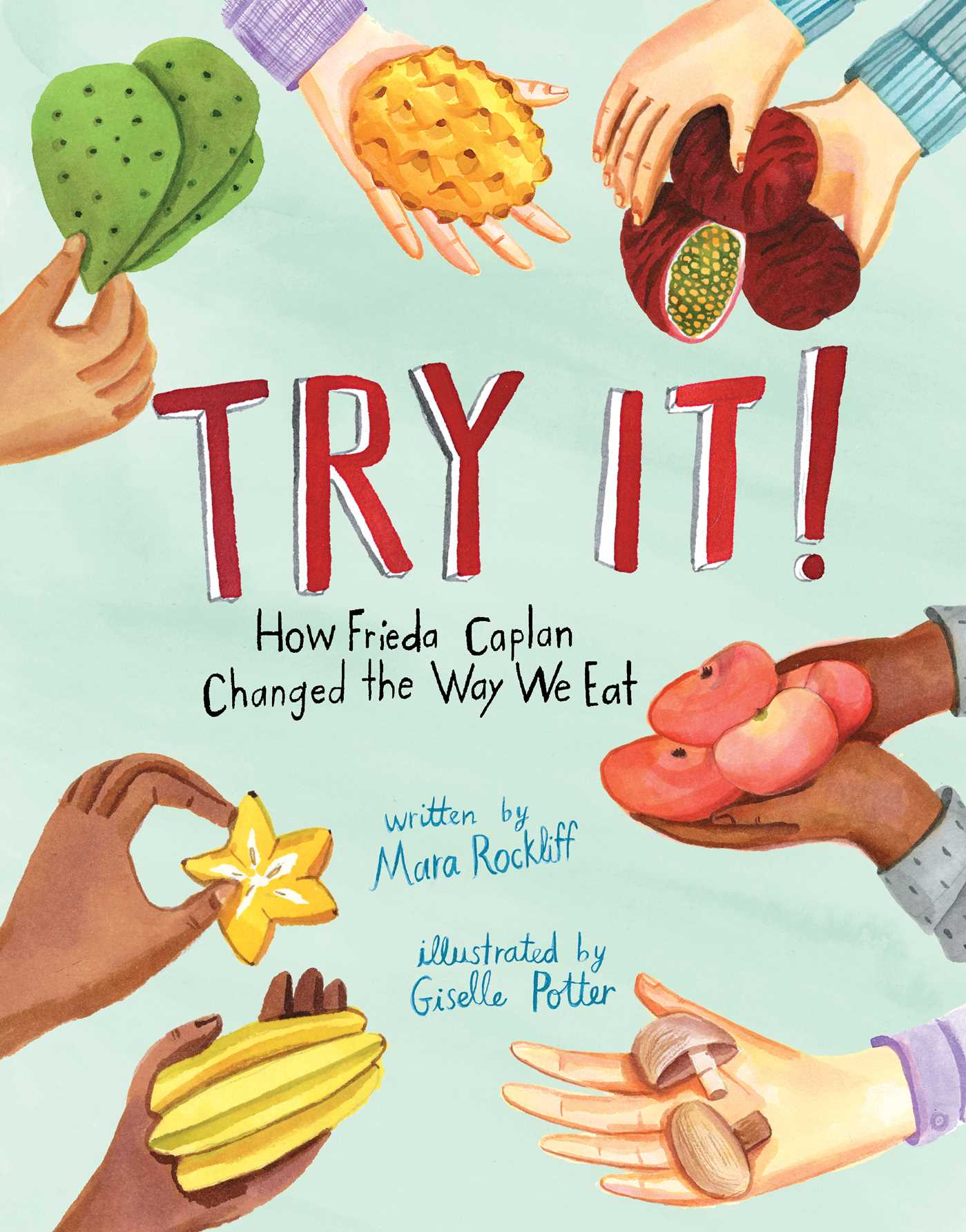 TRY IT!
How Frieda Caplan Changed the Way We Eat
written by mara Rockliff, illustrated by Giselle Potter
Beach Lane Books, 2021
ISBN: 978-1-5344-6007-2
Source: publisher for review
Ages 4 and up
All opinions expressed are solely my own.
ABOUT THE BOOK
Meet fearless Frieda Caplan—the produce pioneer who changed the way Americans eat by introducing exciting new fruits and vegetables, from baby carrots to blood oranges to kiwis—in this brightly illustrated nonfiction picture book!

In 1956, Frieda Caplan started working at the Seventh Street Produce Market in Los Angeles. Instead of competing with the men in the business with their apples, potatoes, and tomatoes, Frieda thought, why not try something new? Staring with mushrooms, Frieda began introducing fresh and unusual foods to her customers—snap peas, seedless watermelon, mangos, and more!

This groundbreaking woman brought a whole world of delicious foods to the United States, forever changing the way we eat. Frieda Caplan was always willing to try something new—are you?
REVIEW
I learned a lot reading this book about a woman who had the courage to try new things and to encourage others to do so as well.  Frieda Caplan worked in the produce industry.  When she first started most of what was sold was the well-known stuff such as potatoes, apples, oranges, etc.  When she decided to introduce mushrooms, people (men) were shocked.  But she persisted and over time people started to try the different kinds of produce that she started selling.  Her instincts were excellent and eventually people started to come to her for advice about what to buy or sell.  She started her own business and brought her daughters into the fold.  The business continues to this day.  Rockliff does a fine job of showing how Caplan helped to change what people eat.  Potter's illustrations do a great job of showing not only the different foods that Caplan worked to promote but how things changed over time, including clothing and hairstyles.  This gives the reader a sense that while things changed they didn't necessarily change overnight.  A fine picture book biography about a lesser known individual who made a difference in the world.
2021 books Picture Book Biographies