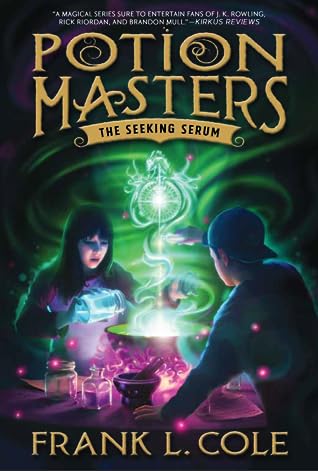 Mezzarix has stolen the Vessel, the source of power for all potion masters, and is preparing to launch his final attack on the potion-making community—which includes his own family.

Gordy and his family have gone into hiding, but when his mom uncovers some new information, she takes Gordy into the underground network known as the Swigs, a haven for renegade potion masters and black-market potions, to secure support in the fight against Mezzarix. But when Scourges, rebel potion makers acting on orders from Mezzarix, attack the Swigs, Gordy barely escapes with his life and is forced to leave his family behind.

As the fight intensifies between B.R.E.W. and the Scourges, it falls to Gordy and his friends—Max, Sasha, and Adilene—to locate Mezzarix's hidden headquarters, retrieve the Vessel, save the world, and unite the potion-making community.

The world of Potion Masters is full of fantasy and adventure as Gordy and his friends learn the power of friendship and loyalty, and to trust in their own individual talents.

This third and final volume in the Potion Masters Trilogy has Gordy and his friends and family facing off with his grandfather, Mezzarix Rook and his Scourges for control of the Vessel.  Without the Vessel, Gordy's side has no chance of winning.  But Gordy's mother is determined to protect him by sending him into hiding with his father and siblings.  After Gordy gets separated from his mother and their allies, he and his friends must use their own ingenuity to avoid capture and find a way to locate his grandfather.  If Gordy, Max, Sasha, and Adilene can't find a way to take down Mezzarix and retrieve the Vessel, the world may be lost to the chaos that Mezzarix so craves.  Cole has written an exciting, clever ending to his fantasy series.  I've really enjoyed this series.  The characters have depth to them, even Mezzarix isn't wholly evil.  I found myself sympathizing with Gordy as he is forced to attempt something to stop his grandfather that it breaks his heart to have to do.  The creative use of potion making and potions is developed so creatively that I found it refreshing and enjoyable.  And the wide variety of different types of potions made the action scenes very entertaining.  A winning conclusion to a fun series.
2020 books Favorite author Favorite Series middle grade fantasy