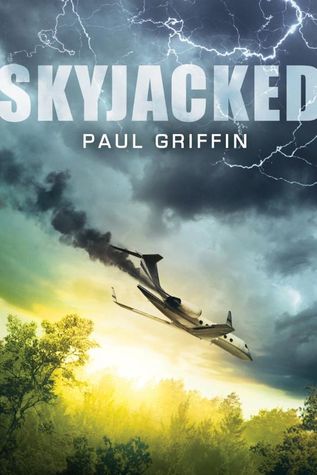 Six friends who attend Manhattan's elite Hartwell Academy are returning from an end-of-summer camping trip together on a private plane. Everything seems normal... except one of the regular pilots is sick, so there's a replacement; Cassie is starting to get violently ill for no clear reason; and they realize the plane is flying west, not east. Soon it's clear: the plane has been hijacked. But by who, and why? Where are they going? What made Cassie so sick? And even if they somehow make it into the cockpit and overpower the hijacker, could they land the plane? Emotions are running high, and choosing who to trust is a matter of life or death.
REVIEW
Skyjacked takes the reader on a thriller of a ride.  Five teenage friends who attend an elite private academy are finishing up a camping trip.  After hopping on Cassie's father's private jet, they are ready to head back to New York. But things are quite right.  Emily is dating Tim, but seems interested in Jay, who isn't quite comfortable at the school since he's on scholarship and not from a wealthy family like the others.  Cassie and Brandon are best friends, but Cassie's recklessness threatens their lives.  And Tim, despite his large size, is a confused scared kid.
Things take a strange turn when Jay notices the plane is heading west instead of east and the cockpit door is locked, which it isn't normally.  When Cassie gets violently ill, fear enters the cabin and the teenagers and Cassie's bodyguard have to decide what to do.  Meanwhile, Michelle is working as an intern at NATIC (National Air Traffic Investigation Center) in hopes of getting a recommendation to the Air Force Academy.  But after failing a simulation, she's not as confident as she once was.
When it becomes clear that the flight is deliberately off-course, Michelle struggles to find a way to help amidst all the chaos.  And on the flight, the friends frantically try to save Cassie's life while trying to decide what, if anything, they should attempt to do to get the plane back on course.  The hijacker seems obvious at first, after all the co-pilot is a fill-in and they know nothing about her.  But the bodyguard is new as well and Cassie doesn't like her.  As the situation becomes more dire so do the stakes and difficult decisions must be made.
I stayed up late finishing this one because I wanted to know what happened.  To me that's a sign the author did a good job with the plotting.  The story is front and center here, although enough details are given about various characters for them to seem real and unique.  Since the focus is on the tragedy the teens find themselves in there isn't any drugs or sex.  I was also impressed that their isn't any swearing either making this appropriate for middle grade readers.  Middle grade readers who enjoy thrillers that is.  Naturally, the situation doesn't resolve itself in an entirely happy way, there are deaths involved as one might expect in such a situation.  Probably not the best read though for middle graders who don't handle tragedy or tension very well.  But an enjoyable read for those who aren't as troubled by those things.
2019 books 2019 favorites middle grade adventure Middle Grade thrillers