MMGM: Order of the Majestic by Matt Myklusch 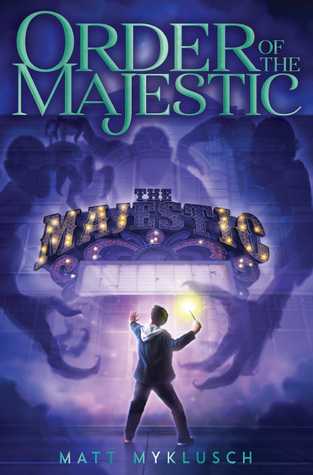 ORDER OF THE MAJESTIC
by Matt Myklusch
Aladdin, 2019
ISBN: 978-1534-42487-6
Source: publisher for review
Ages 9-12
Middle grade speculative/fantasy fiction
All opinions expressed are solely my own.

Twelve-year-old daydreamer Joey Kopecky’s life has been turned upside down. After acing a series of tests, he’s declared a genius and awarded a full scholarship at a special (year-round!) school. He’s understandably devastated, until he takes one last test, and the room around him disappears, replaced by the interior of an old theater.

There, Joey meets the washed-up magician, Redondo the Magnificent, and makes a shocking discovery…magic is real, but sadly, there isn’t much left in the world. It may be too late to save what little remains, but for the first time in his life Joey wants to try—really try—to do something big. Soon he’s swept up into a centuries-old conflict between two rival societies of magicians—the Order of the Majestic, who fights to keep magic alive and free for all, and the dark magicians of the Invisible Hand, who hoard magic for their own evil ends.

The endless battle for control of magic itself has reached a tipping point. For Redondo and the Order to survive, Joey must inherit the lost legacy of Harry Houdini. Will he prove himself worthy, or will the Invisible Hand strike him down? The answer will depend on Joey’s ability to believe, not just in magic, but in himself.

Order of the Majestic takes the reader into the heart of a world where magic is mostly controlled by an evil organization called the Invisible Hand.  A young boy named Joey, has no idea that magic is real, for him, he's stressed about his parents wanting him to take some special tests and attend a special private school for geniuses.  Just because he aced a few standardized test.  But he doesn't see himself as anything special, even after being asked to take a strange test that lands him inside the phantom remains of an old theater.  Here he meets Redondo the Magnificent, a talented magician that disappeared twenty years ago.  Redondo used to be the head of an organizer called the Order of the Majestic (named after the Majestic Theater in which Redondo now hides).  This organization used to oppose the Invisible Hand and worked to spread magic among the masses.

Joey is fascinated by magic's existence, but as he quickly becomes involved in the conflict between the Invisible Hand and Redondo, he's not at all sure that he wants to be involved at all.  But something keeps drawing him back.  A competition between him and two other young people for the powerful wand that Redondo possesses is something that leaves Joey struggling.  He doesn't have the skills to compete against Leonora and Shazad, but he can't bring himself to quit.  But when his doubts about himself and about Redondo leave his new-found friends and Redondo in danger of destruction, Joey has to decide if he can find the courage and belief to step up.

The idea of magicians having real magic and Harry Houdini having a powerful wand is a great one for a middle grade fantasy novel.  Joey also makes for a great main character as he struggles with self-belief and his reluctance to get involved in the whole evil vs. good use of magic war.  It's a valid fear that holds him back after all, he doesn't know Redondo very well, and Redondo is rather a jerk through most of the book.  He also knows little about magic and how it works and he's immediately thrown into some difficult situations.  And of course, his self-esteem struggles make it hard to believe in anything else and magic requires belief.

I enjoyed the story for the most part, the plot points are rather creative and I loved the phantom theater as a setting.  And as I said above, Joey is a sympathetic character.  The villains are very villainous and the school Joey might attend is intriguing.  What I had a hard time with is Redondo himself.  He took himself out of the fight twenty years earlier after an unfortunate series of events and then has the gall to blame Joey when he's tricked and manipulated by the enemy.  I really wanted to shake him at that point.  Luckily, he redeems himself later on.  Overall, Order of the Majestic works as a fantasy involving themes of belief, friendship, and power.
2019 books middle grade fantasy Middle Grade Speculative