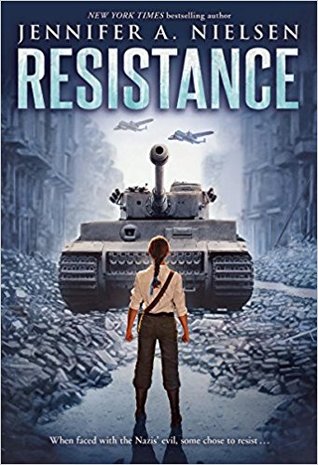 Chaya Lindner is a teenager living in Nazi-occupied Poland. Simply being Jewish places her in danger of being killed or sent to the camps. After her little sister is taken away, her younger brother disappears, and her parents all but give up hope, Chaya is determined to make a difference. Using forged papers and her fair features, Chaya becomes a courier and travels between the Jewish ghettos of Poland, smuggling food, papers, and even people.

Soon Chaya joins a resistance cell that runs raids on the Nazis' supplies. But after a mission goes terribly wrong, Chaya's network shatters. She is alone and unsure of where to go, until Esther, a member of her cell, finds her and delivers a message that chills Chaya to her core, and sends her on a journey toward an even larger uprising in the works — in the Warsaw Ghetto.

Though the Jewish resistance never had much of a chance against the Nazis, they were determined to save as many lives as possible, and to live — or die — with honor.

Jennifer Nielsen in one of my favorite authors and she's proved her skill once again.  Both her fantasy novels and her historical fiction have provided me with hours of great reading.  This book is the story of a young Polish Jewish girl who joins the resistance when she's forced to leave her family.  At first the Jewish Resistance's work revolves around saving their people.  But eventually they turn to fighting the Nazis through sabotage and theft.  But when things go wrong, Chaya ends up on her own with a girl she isn't sure she can trust, on what seems to be a suicide mission.  But she's determined not to give in to the Nazis use of fear and pain, even if it means she dies fighting.  The story is detailed and compelling and it's clear that Nielsen has done her homework.  I can't help but cheer Chaya on, even when she's forced to do unpleasant things that a sixteen-year-old should never have to do.  But are all her efforts for naught?  After all she's living in a occupied country where even many of her own countrymen/women don't want her around. This story of courage in the face of fear and pain makes for a powerful read.
2018 Favorites Favorite author middle grade historical fiction