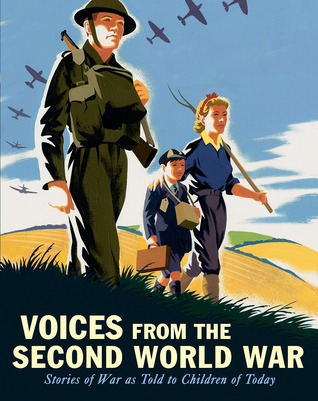 VOICES FROM THE SECOND WORLD WAR
Stories of War as Told to Children of Today
Candlewick Press, 2018
ISBN: 978-0-7636-9492-0
Source: ARC from publisher for review
All opinions expressed are solely my own.

The Second World War was the most devastating war in history. Up to eighty million people died, and the map of the world was redrawn. More than seventy years after peace was declared, children interviewed family and community members to learn about the war from people who were there, to record their memories before they were lost forever. Now, in a unique collection, RAF pilots, evacuees, resistance fighters, Land Girls, U.S. Navy sailors, and survivors of the Holocaust and the Hiroshima bombing all tell their stories, passing on the lessons learned to a new generation. Featuring many vintage photographs, this moving volume also offers an index of contributors and a glossary.

With more and more people who survived World War II dying, it's become all the more important to record their experiences.  These are the people who lived through a war that the rest of us can't even begin to imagine.  This book combines the accounts of several dozen people who lived through some aspect of the war, whether concentration camps, military service, bombings, or life as a refugee.  So many historical accounts focus on the experiences of the famous or well-known, because in many cases they are the ones whose experiences are documented.  This book looks at the experiences of the ordinary men, women, and children.  The book covers everything from the London Blitz, D-Day Invasion, Holocaust, kindertransport, bombing/fighting, and resistance activities.  This book is a very valuable resource for teaching about World War II and why everything should be done to prevent such a war from ever occurring again.  Some of these accounts were sickening in the horrible things they describe, but unfortunately that's war.  Thus, I would only use the book with older students (junior and senior high).  But the accounts included here show what war is really like in all it's ugliness.  The book also highlights the courage and determination of ordinary individuals in facing the difficulties and heartbreak that war brings.
Cybils Great Teaching Books YA Nonfiction