SERIES THURSDAY: The Two and Only Kelly Twins by Johanna Hurwitz 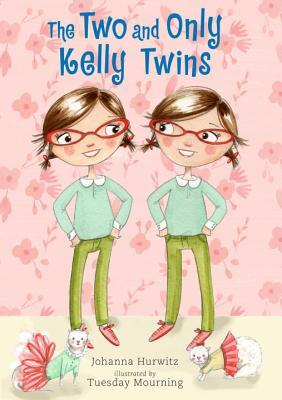 THE TWO AND ONLY KELLY TWINS
by Johanna Hurwitz, illustrated by Tuesday Mourning
Candlewick Press, 2013
ISBN: 978-0-7636-5602-7
Early Chapter book
Ages 6-9
Source: Blue Slip Media/Publisher for review
All opinions expressed are solely my own.

Second-graders Arlene and Ilene Kelly are twins — identical twins to be exact — and they love being a pair. They love to dress alike, they have identical pet ferrets, and they do everything together. But being a twin is not always easy. When a set of triplets comes to school, Arlene and Ilene wonder whether triplets are more special than twins. At Halloween, on different streets in identical witch costumes, some neighbors think that the girls are one person trying to get extra candy. And when Arlene gets sick and has to visit the hospital, the twins each find out what it’s like to be one instead of two. But whether they’re together or apart, Arlene and Ilene know they’re lucky to have each other.


Hurwitz has a gift for writing realistic early chapter books.  Her characters feel genuine and her plots are interesting.  Arlene and Ilene are identical twins who love being identical.  But that doesn't mean they agree on everything.  The girls agree a lot of the time, but they argue like most siblings do.  In this book the girls deal with having pets (ferrets), Halloween, new triplets at school, and Arlene having surgery.  The book is a fun read with plenty to smile about, except when the girls lie about having a third sister.  I like to recommend these sorts of books to 2nd-3rd graders because they can relate to the stories and the shortness makes it readable.  The illustrations breaking up the text are a nice touch and makes the book easier to swallow for young readers.  An enjoyable series from an accomplished writer. 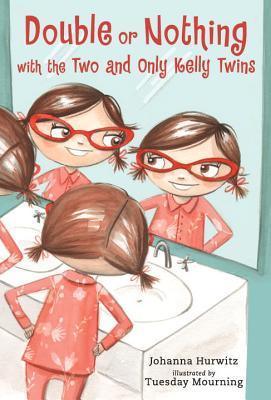 DOUBLE OR NOTHING with the Two and Only Kelly Twins
by Johanna Hurwitz, illustrated by Tuesday Mourning
Candlewick Press, 2017
ISBN: 978-0-7636-8808-0
Early Chapter Book
Ages 6-9
Source: ARC from Blue Slip Media/publisher for review
All opinions expressed are solely my own.

What s the same about identical twins and what s different? Sleepovers, poetry projects, and new haircuts are in play as seven-year-old Arlene and Ilene start coming into their own.
Arlene and Ilene love so many things about being identical twins. They like sharing a room, sharing friends, and wearing matching outfits. But they re in different classes at school, and one twin has a scar that the other one doesn t. One morning, their friends Monty and Joey point out a new difference that takes the sisters by surprise and gets them thinking: if they are identical twins, why are there differences between them at all? Their tongues must be the same, so why do they like different kinds of ice cream? Why does Arlene wear pink nail polish while Ilene thinks it s silly? Why is Ilene sleeping soundly when Arlene is awake, wondering how she can be sure that she is Arlene, not Ilene? Revisit the funny, lovable characters from The Two and Only Kelly Twins and take a peek at the wonders and puzzles of being an identical twin."

In this addition to the Kelly Twins series, Arlene and Ilene discover that while they are identical twins, there are differences between them.  They have different tastes in nail polish, foods, and socks.  But they still enjoy doing things together and so it's a shock with their friends Claudia and Roberta (part of a set of triplets) propose a sleepover with Ilene going over to Roberta's house and Arlene and Claudia staying at their house.  Poetry lesson reveal further differences.  But a sudden outbreak of lice in the girls' classrooms means that the possibility of different hairstyles arises.  Arlene and Ilene make for fun, easy to relate to characters that early chapter book readers can certainly get behind.  And the challenges the girls face are ones that many young readers will recognize.  Yet the twin experience is new for many children so it's kind of eye-opening in that regard as well.  A fun series for young readers who like realistic, contemporary books.