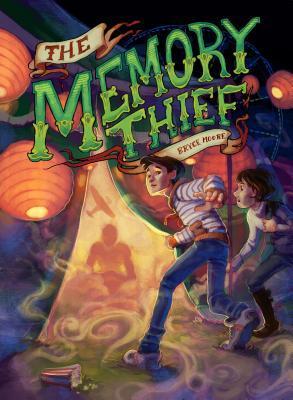 Twin brother and sister Benji and Kelly wander off at the local county fair after witnessing their parents argue. When Benji runs into a group of bullies, he escapes into a tent called The Memory Emporium, where he meets a strange old man inside named Louis. The old man shows him a magically vivid memory of a fighter pilot, in the hopes of getting Benji to pay to see other memories Louis has collected from people over the years.

Benji quickly realizes the ability to take memories could help his parents stop fighting with each other, and he asks Louis to teach him how to become a memory thief. But Louis isn't the only person with the ability to show and manipulate memories. There's also the mysterious Genevieve, a Memory Thief with much more nefarious motives.

Benji learns how to manipulate memories himself, but having that power comes at a cost to his family, and possibly to his own mind as well. Genevieve's powers get out of control as she steals more and more memories from people in town including Benji's sister, Kelly. Benji must learn to use this newfound power, as he is the only one able to stop Genevieve.

I've read a lot of fantasy novels for middle grade readers over the years.  It's a genre that I particularly love.  And I can say that this particular novel is different than any I've read before.  Benji is really frustrated with his parents, who fight all the time and are even planning a divorce.  At the county fair, Benji runs into an old man who claims to be a Memory thief, he buys and sells memories.  After discovering that his parents are getting a divorce, Benji is interested in the old man's services, hoping that taking away his parents' angry memories might 'fix' the problem.  But Benji and his twin sister, Kelly run into Genevieve instead.  When Genevieve steals some of Kelly's memories without her permission, Benji all of sudden has bigger problems than his parents fighting.  Benji seeks out the old man only to be given a significant portion of the old man's memories.  Know he knows who to steal memories himself, but he doesn't have the experience that Genevieve has, but he is all too aware that he's the only one that has any chance of stopping her from robbing the entire town of valuable memories and repairing his own mistakes.  Not only does this fabulous story provide a fascinating and exciting plot, but there is a powerful theme here of the morality of 'fixing' things by taking things that don't belong to you.  This makes for a great read for young fantasy lovers who are ready for something a bit different.