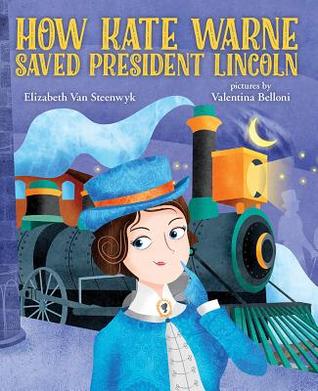 In 1856, when Kate Warne went to see Allan Pinkerton, only men were detectives. But Kate convinced Allan to hire her for his detective agency. She explained that she could worm out secrets where men could not go--in disguise as a society lady! Join Kate on her most important mission--to thwart a plot to assassinate Abraham Lincoln on the way to his inauguration.

Picture book nonfiction is a rather unique genre in that it tries to tell rather complicated stories in as simplified a form as possible.  And while I've read some great picture book nonfiction, there are occasion problems with text conveying things that aren't quite accurate. And there is a bit of that here.  The author is focused on Kate Warne and the remarkable things she did as a female detective for Allan Pinkerton's detective agency. So it makes sense that the other people who helped ferret out the plans to kill Lincoln aren't really mentioned, but it would have been more accurate if they were.  Warne wasn't the only undercover detective Pinkerton sent to Baltimore to find out what was going on. See Lincoln's Spymaster by Samantha Seiple for more details.

And at one point in the story the author states that: "Abraham Lincoln was elected president on November 6, 1860, but many people in the southern states were opposed to his intention to abolish slavery." Now this is technically correct, but Lincoln said in his speeches over and over that he did NOT intend to abolish slavery where it currently existed, just oppose the spread of it into new territories and states.  So the implication is a bit misleading, although many at the time interpreted his statements to mean that he intended to abolish slavery altogether.

Despite this slight errors in the text, I did enjoy reading about Kate's exploits and her daring in rooting out criminals at great risk to herself.  She's one of those women who helped pave the way for where women are today.

The illustrations are delightfully bright and attractive, sure to appeal to young readers. In fact, the illustrations were my favorite part, especially the different outfits that Kate wears, and Lincoln in disguise.  Overall, a nice addition to collections. 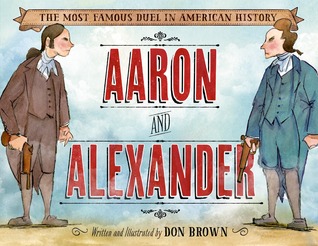 AARON AND ALEXANDER
The Most Famous Duel in American History
written and illustrated by Don Brown
Roaring Brook Press, 2015
ISBN: 978-1-59643-998-6
Ages 8-12
Source: school library
All opinions expressed are solely my own.

Aaron Burr and Alexander Hamilton were both fierce patriots during the Revolutionary War, but the politics of the young United States of America put them in constant conflict. Their extraordinary story of bitter fighting and resentment culminates in their famous duel. For young patriots who may not yet know the shocking and tragic story, Aaron and Alexander captures the spirit of these two great men who so valiantly served their country and ultimately allowed their pride and ego to cause their demise.

The story of the duel between Aaron Burr and Alexander Hamilton is both fascinating and complex.  So I was interested to see how Brown presented it.  I appreciated how Brown compared the backgrounds and talents of the two men, both their similarities and differences as he guided the reader to the fateful day.  Of course, there simply isn't room in the story to convey the complexities of the relationship between the two men, but I'd say that Brown does a superb job of it, even quoting both men on occasion.  Since neither man was known for tact, it seems inevitable that the two would have a major clash at some point, but it's also tragic that neither could reign in their pride enough to avoid the duel that followed.  As with previous illustrations, Brown does a wonderful job here conveying the drama and tension that grew between the two men and how it exploded during the duel.  This is one of those stories that helps young readers understand that history isn't as boring as they often mistakenly think it is.  However, I would recommend using this with slightly older students (8-12) rather than the normal picture book crowd (4-8) just because of the duel.  The illustrations aren't overly graphic, but someone does die and young readers aren't likely to understand why these two brilliant, but prideful men couldn't find another way to solve their problems. Come to think of it, I don't think I understand it either.
Nonfiction Picture book challenge picture book nonfiction