BLOG TOUR: Huber Hill and the Golden Staff of Cibola by B.K. Bostick

HUBER HILL AND THE GOLDEN STAFF OF CIBOLA
by B.K. Bostick
Sweetwater Books, 2013
ISBN: 978-1-4621-1098-8
Middle Grade Fantasy
Grades 3-6
Review copy provided by publisher in return for honest review.
All opinions expressed are solely my own. 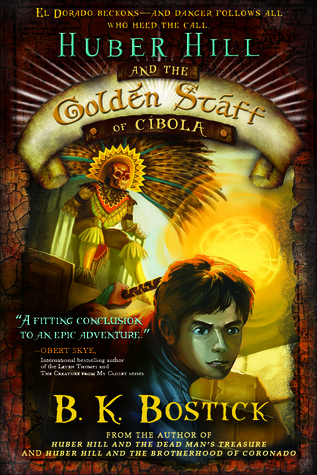 “He should’ve been back out by now,” Hannah said. “Let’s call the cops.”

“Heck with that,” Scott said, opening the car door. “I’m goin’ inside.”

“Scott! What are you doing?”

“If we call the cops, the Brotherhood will find out somehow. What d’ya think’ll happen to our folks then?”

Before she could answer, Scott was out of the car, jogging toward the front door to the Hill household. The black doorway swallowed him up.

It’s a race to the Golden Staff of Cíbola! But time and odds are stacked against Huber and his friends. Salazar and the Brotherhood of Coronado are chasing the legendary item as well, and they’re willing to sacrifice anything—or anyone—to get it.

When an old diary leads Huber and his friends to New Mexico, they must explore ancient caverns, avoid tricky traps, and solve perplexing riddles as they search for the Golden City. But casualties pile up and time is running out . . . And even if Huber and his friends get there first, how will they destroy the Staff and escape the forgotten city? Hold onto your seats as the Huber Hill series hurdles toward an epic conclusion. 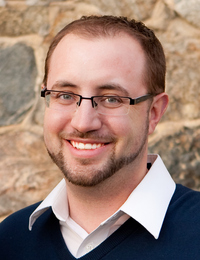 B.K. Bostick, author of Dead Man's Treasure, resides among the magnificent Rocky Mountains. In addition to writing, he has spent his career in education. He earned his Bachelor’s degree in Psychology from the University of Utah and his Masters in Psychology from Utah State University. He has worked as a teacher, after school program coordinator, junior high school counselor, and most recently as a teacher mentor for a University. He loves spending time with his lovely wife and two dogs. In his spare time, he enjoys eating cheetos and watching old episodes of the Twilight Zone.