MIDDLE GRADE BOOK REVIEW: Alvin Ho, Allergic to Babies, Burglars, and Other Bumps in the Night by Lenore Look 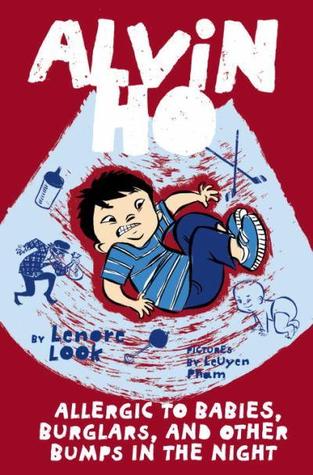 Readers will herald the return of their favorite phobic boy in this, the fifth book in the beloved Alvin Ho series. Alvin's mother has been getting bigger . . . and bigger. Alvin's sure it's all the mochi cakes she's been eating, but it turns out she's pregnant! There are lots of scary things about babies, as everybody knows—there's learning CPR for the newborn and changing diapers (no way)—but the scariest thing of all is the fact that the baby could be a GIRL. As a result of the stress, Alvin develops a sympathetic pregnancy and hilarity definitely ensues. Once again, Lenore Look and LeUyen Pham deliver a story that's funny and touching in equal measures.

Getting a new sibling is a pretty common theme in children's literature. Undoubtedly because for many children it is a big deal.  But I doubt many books with that theme are as funny as this one.  Alvin is stunned when his mother informs him that she is pregnant and will be having a baby. Alvin freaks out big time (not unusual for him). And he is even more shocked when he is informed that he is 'sympathetically pregnant' or 'simply pathetic pregnant' as he puts it.  And his friends really aren't much help telling him the dangers of naming the baby, getting fat, and crying babies. In addition, Alvin is pushed into donating his life savings and his PDK (Personal Disaster Kit) to help those suffering from the earthquake in Haiti. Can Alvin learn how to deal with the coming baby? What if, horror of horrors, it's a girl?!

Alvin is a sweet boy who worries/stresses about pretty much everything on the planet, but who honestly wants to help others and do the right thing. And his family is always right there to back him up. His brother Calvin and his Rube Goldberg machines, Anibelly's kind words, and his mother's efforts to help him adjust to the coming baby all help give Alvin the support he needs to let go of some of his worries.  The book is quite funny, Alvin is constantly misunderstanding what he is told by his teacher, his classmates and even his family. This book is a light fun read for early middle grade readers who may find themselves worrying about the world around them and the changes found there. Recommended.