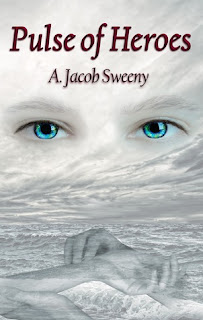 PULSE OF HEROES
by A. Jacob Sweeny
Thalamus Press, 2010

Michelle used to feel like she was behind in everything, especially school and relationships. Her great aunt from the old country says she is like a bland meal, "no salt or pepper". But in junior year, everything changes. Her father takes a position on the Town Council, a popular boy in school becomes interested in her, and most importantly, the Hekademos Learning Center, a private school for 'troubled' students, moves into her quiet neighborhood amidst the protests of the entire town.

After an embarrassing fall over the school wall, Michelle meets Elliot and her ordinary ‘bland’ life changes its course forever.

Elliot is no ordinary human. In fact, no one at the Hekademos Learning Center is. Beautiful and fierce, they have survived throughout the millennia by weaving in and out of human events. Through them, Michelle learns that history and myths from around the world are dotted with references to their kind. Michelle falls madly in love with the ever-striking and mysterious Elliot and, as much as he tries to fight it, he develops strong feelings for her as well. Although Elliot carries numerous painful memories from his many pasts, he disregards his own better judgment and the advice of his friends, and finds himself falling for Michelle‘s offbeat personality. Their feelings grow in intensity, but when History catches up with them, the difference between their life paths threatens to destroy any future that they might have had together.

Michelle learns that there are infinite shades of gray between black and white, and has to deal with the bundle of contradictory emotions called love. She has to trust her intuition in order to face the danger and uncertainty of being drawn into Elliot’s wondrous world. Ultimately, it is up to Michelle to make the split-second, life-altering decision that will either tear them apart forever, or give them another chance.

I have to be honest here.  This book sounded really great when I first heard about it and the reviews I have read about it are primarily very positive.  But I was unable to finish it.  However, keep in mind that I am one of those who refused to read Twilight so paranormal is not my favorite genre to begin with.  For the right reader, this book clearly does very well, please make sure you continue to follow the blog tour and read the other reviews.


If you choose to keep reading my review, I will clarify what I did like of what I read and what I had a hard time with.


What I Liked:  I liked the school and the secrets contained therein.  Maybe it's a leftover liking from Harry Potter and Hogwarts.  Or maybe it's the fact that I work in a school, but I do enjoy stories that take place in schools.  There is so much potential for conflict and challenges.  I also liked the subtle clues that lead Michelle to realize that there is something different about this school and it's attendees.  Elliot and his companions were definitely appealing, intriguing characters.


What I didn't like:  So much of what I read felt like telling rather than showing. For example, the author explains, "Michelle was sitting on the bleachers talking to Anna about the upcoming softball season.  Anna was wondering if Michelle would be interested in joining the team. Michelle wished that she had the same energy that Anna had." Where is the actual conversation?


I also didn't find Michelle to be a particularly likable character. I also had to wonder, what common ground do she, at 17, and Elliot at who knows how old, have?  Their experiences are so different.  Would such a relationship really last very long?  I also didn't appreciate the trickery Michelle used to try to find out more about Elliot and the school.  It didn't seem in keeping with her so-called good girl image.  Several issues were brought up and then dropped, for example, her struggles in Italian that were mentioned and then dropped completely from the story line.  I also had a hard time with a mother who seems very caring at one moment and then takes her sick daughter to the mall the next.

Overall, I thought there was a lot of potential, but I didn't enjoy what I read enough to keep going.
Blog Tour Book Reviews Fantasy Secondary grades