May 14, 2012
With the 100th anniversary of the sinking of the Titanic being memorialized this year, there has been an influx of new books on the topic, both fiction and nonfiction.  This is a perennially favorite topic among my students so I'm sharing some of the ones I've read.  Today I'm highlighting two nonfiction books, later this month I hope to highlight several fictionalized stories.  See here for another nonfiction book on the Titanic. 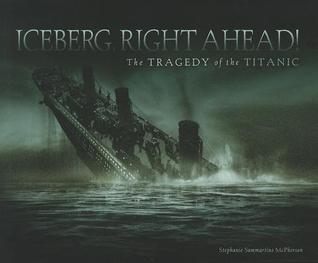 ICEBERG, RIGHT AHEAD! The TRAGEDY OF THE TITANIC
written by Stephanie Sammartino McPherson
Twenty-First Century Books, 2012
ISBN: 978-0-7613-6756-7
Grades 3 and up
Reviewed from personal copy.


Only 160 minutes passed between the time a sailor on lookout duty uttered these chilling words and the moment when the mighty ocean liner Titanic totally disappeared into the cold, dark waters of the North Atlantic. This century-old tragedy, which took more than 1,500 lives, still captivates people in the twenty-first century.

Seventy-three years separate the two major Titanic events--the 1912 sinking of the vessel and the dramatic 1985 discovery of the wreck by Robert Ballard. But additional stories about the victims, survivors, rescuers, reporters, investigators, and many others show the far-reaching effects this tragedy had on society. Award-winning author Stephanie Sammartino McPherson has collected numerous personal accounts of the event, including the knighted man who spent the rest of his life in seclusion because he was accused of dishonorable behavior in a lifeboat, the stewardess who survived two shipwrecks and a mid-ocean collision, and the New York Times executive who sent multiple reporters to meet the rescue ship, thus earning a national reputation for his newspaper. She also links the Titanic tragedy to changes in regulations worldwide. After a Senate Inquiry and a British trial attempted to assign blame for the disaster, new laws on ship safety were put in place. A group of nations also banded together to form an ice patrol, eventually leading to the formation of the U.S. Coast Guard.

Even the most avid Titanic fans will learn something new as McPherson brings the reader up to date on the politics and intrigue still surrounding the wreck--including what modern science can reveal about what really happened to the ship and who was at fault. Prepare to follow the never-ending story of the Titanic into its second century.

This book is fabulously done.  It is definitely going on my shelf of favorites.  Not only is the writing crisp and easy to read, but the whole design is beautifully done.  The photographs, illustrations, and sidebars are placed so that they add to the overall design but don't interrupt the flow of the narrative.  This is the sort of nonfiction that would work really well as a read-a-loud.  One of the things I especially appreciated were the sidebars explaining some of the things we are still learning about the Titanic and why she went down.  For example, on page 10, the author points out that ideas are changing about just what damage the iceberg did to the ship.  From the beginning, it was assumed that the iceberg created a 300 foot long gash in the starboard side of the ship.  But a new theory suggests that was not the case, instead the rivets gave way creating hundreds of small holes.  The water pressure was so great that it forced water through these holes at a remarkably fast pace. I highly highly recommend this book. 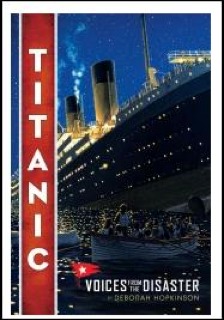 
Critically acclaimed nonfiction author Deborah Hopkinson pieces together the story of the TITANIC and that fateful April night, drawing on the voices of survivors and archival photographs.

Scheduled to coincide with the 100th anniversary of the tragic sinking of the TITANIC, a topic that continues to haunt and thrill readers to this day, this book by critically acclaimed author Deborah Hopkinson weaves together the voices and stories of real TITANIC survivors and witnesses to the disaster -- from the stewardess Violet Jessop to Captain Arthur Rostron of the CARPATHIA, who came to the rescue of the sinking ship. Packed with heartstopping action, devastating drama, fascinating historical details, loads of archival photographs on almost every page, and quotes from primary sources, this gripping story, which follows the TITANIC and its passengers from the ship's celebrated launch at Belfast to her cataclysmic icy end, is sure to thrill and move readers.

This book is also very well done.  Hopkinson does a great job of merging the experiences of some of the survivors.  The addition of historical photographs and documents adds to the reading experience, makes it seem more immediate. I appreciated how she blended explanations with actual quotes.  The text is quite readable and would make a great nonfiction read-a-loud.  Books like this help children see that history doesn't have to be dry and boring.  The real stories of survivors are heartbreaking in their starkness.  My heart ached for those who left loved ones behind.  The thing I find fascinating about this kind of story is not the disaster itself, but the way people react to it.  Hopkinson doesn't shy away from stories of cowardice as well of heroics, but she doesn't judge, she simply presents what is known about the different people and lets the reader make up his/her own mind.  This is hard to accomplish since looking back it is so easy to judge people and their mistakes.  I highly recommend this book for those looking to learn more about the people involved in the disaster.

Head on over to Ms. Yingling Reads for today's Nonfiction Monday.