February 16, 2011
Today I am sharing three books that offer a variety of interesting topics and story lines, including traveling around the world by car, delightful pets, and minerals that can cause petrification. 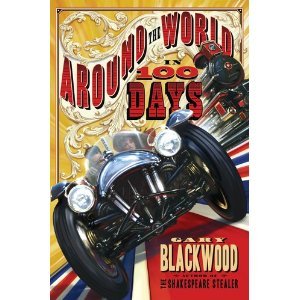 Jules Verne's Around the World in 80 Days is considered a classic adventure tale.  This book revolves around the experiences of an Englishman named Phileas Fogg and his servant, Passeportout traveling around the world by boat, train, and any other form of transportation they could find.

This new book surrounds the exploits of Phileas Fogg's son, Harry, who has inherited his father's pride leading him to make a wager similar to his fathers. He must travel around the world by car in 100 days.  Harry and his friend, Johnny, have built what they believe to be the ultimate motorcar.  Now, Harry and Johnny have the opportunity to test this belief, but there is more at risk than money.  In order to get the money to pay for the trip, Harry has promised that if he loses he will buckle down and choose a profession, something he has avoided strenuously.  With the addition of two companions, Harry and Johnny are on their way.  Charles, the son of the man with whom Harry made his wager, comes along as 'rules enforcer' and Elizabeth, a journalist, to document the trip.

But the plucky group quickly run into all sorts of delays and expenses, including races, wildfires, and possible sabotage.  But Harry, like his father, is to determined to give up, even if it means risking the things most precious to him.

This book doesn't quite live up to its predecessor but provides quite a fun trip nonetheless.  Harry is a likable, if rather reckless fellow, and Johnny with his vulnerabilities, embraces the readers empathy. The adventures the group encounters move the story along quite well.  There are just enough twists and turns to keep the pages turning.  And the reader catches a glimpse of the world as it was in 1891 with plenty of bumpy roads.
Adventure fiction Historical fiction Middle Grade Wild and Wonderful Wednesday