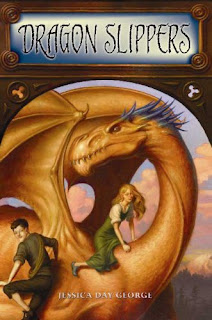 After being sent by her aunt to a dragon's cave to wait for the local squire's son to rescue her, Creel decides that it is time for her to set out on her own.  She makes a bargain with the dragon.  If he will let her take something from his treasure, she will get rid of the knight that the dragon doesn't want to fight.  To her surprise, she discovers the dragon's treasure consists of shoes, but after choosing a beautiful pair of blue slippers, Creel keeps her bargain.

She sends the knight on his way and sets off for the King's Seat to find work as a seamstress.  Along the way she finds herself set upon by bandits and rescued by a golden dragon named Shardas.  She stays for some time with Shardas becoming good friends with the dragon.  She finally sets off for the capital city only to immediately antagonize the Roulain princess who will be marrying her country's prince in order to cement a treaty between the two countries.

Creel finally finds work as a seamstress and settles into her new life with the help of a fellow seamstress named Marta.  But after meeting and befriending the younger prince, Luka, she discovers that her blue slippers have great power.  Unfortunately, she does not find this out until they have been stolen. With the help of Luka and Marta, Creel must find a way to prevent the slippers from being used to destroy not only the capital city, but the Shardas as well.

This book provides not only a delightfully new plot, but characters that the reader can connect with right away.  The friendship between Creel and Shardas is especially interesting as two must reach across their own cultural restrictions in order to do so.  The writing is clear and crisp and the reader immediately becomes immersed in this new and entertaining world.  The plot moves along with plenty of humor and spirit and even a little romance.  A fun read for both boys and girls.

The two sequels, Dragon Flight and Dragon Spear provide additional time with Creel and Luka and their friends.  In Dragon Flight, Creel and Luka are sent to investigate rumors of a dragon army preparing to invade their homeland.  In Dragon Spear, Creel, in the midst of wedding preparations, must rush to the aide of her beloved Shardas, after his wife, Velika is kidnapped (dragonnapped?).  Both books provide the same delightful storytelling and character development as the first. I highly recommend this series for anyone who loves fantasy.
Book Reviews Fantastic Friday Fantasy fiction Middle Grade