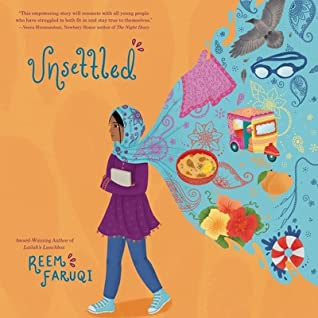 UNSETTLED
by Reem Faruqi, narrated by Ariana Delawari
HarperCollins, 2021
ISBN:  9781665077606 (AUDIOBOOK)
Source: school library -- Sora
Ages 9-12
Middle grade contemporary fiction (novel-in-verse)
All opinions expressed are solely my own.
Book cover & summary provided by publisher through Goodreads.com.
ABOUT THE BOOK
For fans of Other Words for Home and Front Desk, this powerful, charming own voices immigration story follows a girl who moves from Karachi, Pakistan to Peachtree City, Georgia, and must find her footing in a new world. Reem Faruqi is the ALA Notable author of award-winning Lailah's Lunchbox.
A lyrical coming of age story exploring family, immigration, and most of all belonging. Nurah is a compelling main character who I was rooting for all the way through. --Aisha Saeed, New York Times bestselling author of Amal Unbound
When her family moves from Pakistan to Peachtree City, all Nurah wants is to blend in, yet she stands out for all the wrong reasons. Nurah's accent, floral-print kurtas, and tea-colored skin make her feel excluded, until she meets Stahr at swimming tryouts. And in the water Nurah doesn't want to blend in. She wants to win medals like her star athlete brother, Owais--who is going through struggles of his own in the U.S. Yet when sibling rivalry gets in the way, she makes a split-second decision of betrayal that changes their fates.
Ultimately Nurah slowly gains confidence in the form of strong swimming arms, and also gains the courage to stand up to bullies, fight for what she believes in, and find her place.
REVIEW
I thoroughly enjoyed listening to this middle grade novel-in-verse.  Ariana Delawari does a fabulous job reading the story.  With a novel-in-verse, it's particularly important to read the words just right, making sure the story is broken up into the individual poems while still keeping the story moving along cohesively.  Delawari does a great job of this.  In fact I enjoyed it so much, I purchased a copy so that I could listen to it again.
The story follows Nurah, a young Pakistani girl who moves to the United States with her family.  As one might expect, she's not happy about leaving her friends and family and the home she loved. Adjusting to life in Peachtree City, Georgia isn't easy.  But at least she enjoys swimming where she finally makes a friend, Stahr.  But her efforts to become good enough to win medals are outshined by her brother's talent and she struggles with resentment.  On top of that her mother struggles to adjust as well, and a miscarriage leaves the family in disarray.  But after betraying her brother at a swim meet leads to devestation, Nurah has to decide just who and what she wants to be, and if she's willing and able to find the courage to stand up and speak out for that person.
One of the things I especially enjoyed about the book was the beauty of the poems. I really felt like I was in Nurah's head and heart as she struggled to adjust to her changed circumstances.  It was easy to empathize with her struggles to sort out her feelings.  She wants to fit in and belong, and yet she wants to hang on to her culture as well.  The ups and downs she experiences felt natural and oh, so real.  And I winced as she made mistakes along the way, especially the betrayal of her brother.  When she finds her voice and the courage to be herself, I felt like cheering.  This is a book that many young readers will be able to relate to easily; not just because of the changes that Nurah undergoes externally, but because of the mixed emotions and decisions she wrestles with on the inside.
#MMGM Audiobook Middle Grade middle grade contemporary middle grade global literature middle grade novel-in-verse middle grade realistic fiction Novel in verse