#MMGM: The Door of No Return by Kwame Alexander 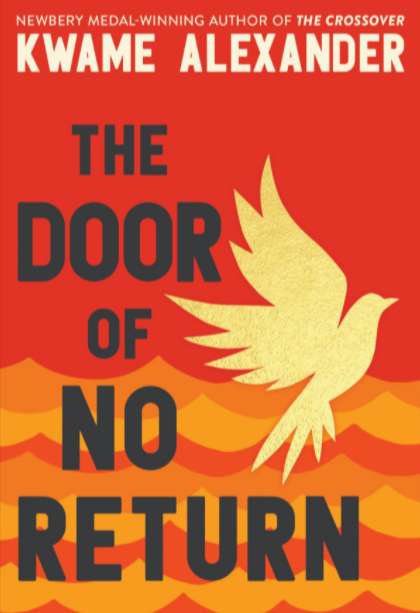 THE DOOR OF NO RETURN
by Kwame Alexander
Little, Brown and Company, 2022
ISBN: 978-0-316-44186-5
Source: purchased
Ages 12 and up
Historical fiction/novel in verse
All opinions expressed are solely my own.
Book cover & summary provided by publisher through goodreads.com.
ABOUT THE BOOK
From Newbery Medal and Coretta Scott King Award winning author Kwame Alexander, comes the first book in a searing, breathtaking trilogy that tells the story of a boy, a village, and the epic odyssey of an African family.
Young Kofi lives and dreams on the banks of the river Offin. He loves these things above all else: his family, the fireside tales of his father’s father, a girl named Ama, and, of course, swimming. It is in the river that he feels invincible and where he thinks he can finally prove himself in a race against his schoolyard rival. But the river also holds dark secrets that Kofi will soon discover. Told never to venture there after nightfall but never told why, Kofi seeks his own answers.
One night is all it takes to transform a life. As his world turns upside down, Kofi ends up on a harrowing journey that steals him away from everything he loves.
In The Door of No Return, master storyteller Kwame Alexander spins an epic and unforgettable tale of adventure, family, betrayal and bravery.
REVIEW
Kwame Alexander has written a book that I will be thinking about for a long time to come.  I suspected what might happen going in to the book from what I'd been hearing about it, but it was still devastating when it happened.  As the story opens, readers meet Kofi, an 11-year-old Ashante boy from Upper Kwanta. He goes to school where he is taught English, and punished when he does wrong.  He likes Ama, a girl in his class who must work for her aunt and uncle to keep a roof over her head.  He loves to swim with his best friend Ebo, even if Ebo has a big mouth.  And his loud-mouth, bullying cousin drives him to distraction.  He admires his brothers athleticism and loves to listen to his grandfather's stories.
The book is divided into seven chapters which begin with prose told in the voice of Kofi's grandfather.  Each chapter is made up of poems through which Kofi tells his story.  The first half of the story revolves around Kofi's home and family.  When his family attends the Kings Festival in which his brother is to wrestle, things go tragically wrong.  Sadly, tragedy leads to more tragedy and Kofi's whole life is ripped apart.  As I read the beautiful verses, my heart broke for Kofi and his struggle to find hope in his changed circumstances.
While written for older middle grade readers, this is a book that teens and adults could benefit from as well.  Not only is the writing beautiful in the stunning poetry that Alexander presents, but the imagery and themes are powerful as well.  The ugliness of what Kofi sees and experiences makes this most appropriate for older middle grade readers and up.  Especially sensitive readers might have a hard time with some of the content.  Those who do pick it up will find Kofi a great character to root for especially at the end where he has to make a choice to keep fighting or to give up.  And while the ending is a bit of a cliffhanger, it does end on a hopeful note.  I eagerly await the rest of the trilogy to find out where Kofi ends up and how he choses to follow his dreams in the face of great difficulties.
2022 books 2022 favorites middle grade historical fiction Novel in verse