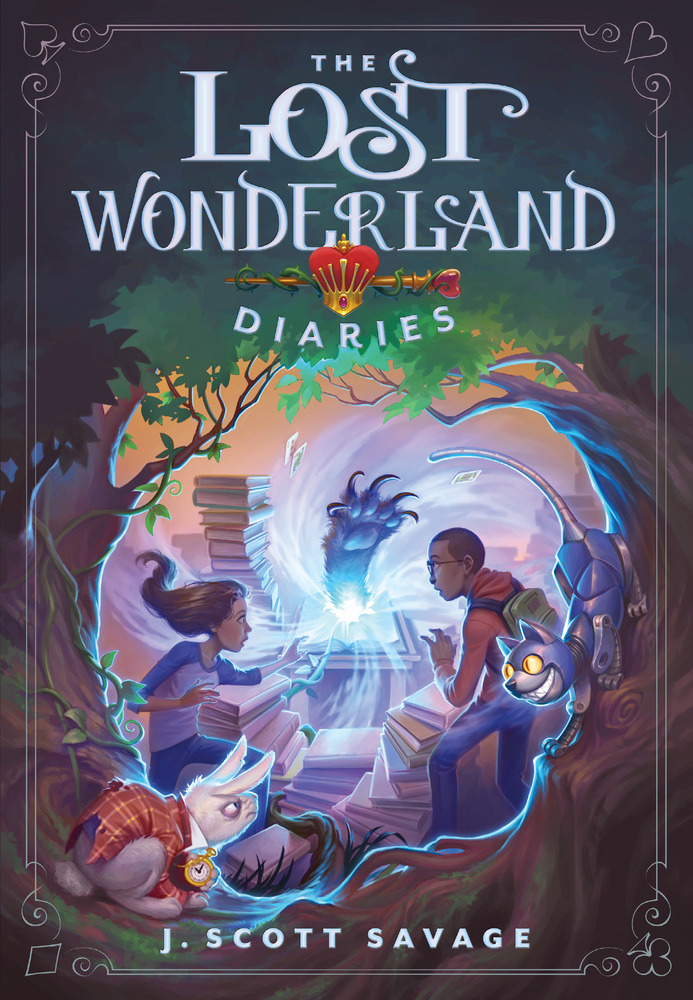 Lewis Carroll, author of the classic book Alice's Adventures in Wonderland, secretly recorded the true story of his actual travels to Wonderland in four journals which have been lost to the world...until now.

Celia and Tyrus discover the legendary Lost Diaries of Wonderland and fall into a portal that pulls them into the same fantasy world as the White Rabbit and the Mad Hatter. However, Wonderland has vastly changed. Some of the characters that Tyrus remembers from the book have been transformed into angry monsters.

Helped by the Cheshire Cat and a new character, Sylvan, a young rabbit, Celia and Tyrus desperately work to solve puzzles and riddles, looking for a way out of Wonderland. But the danger increases when the Queen of Hearts begins hunting them, believing the two young visitors hold the key to opening multiple portals to multiple worlds, and she will stop at nothing to capture them.

Will the crazed creatures of Wonderland escape into the real world? Can Celia and Tyrus stop them and save both worlds? Or will they be trapped in Wonderland forever?

J. SCOTT SAVAGE is the author of both the Mysteries of Cove and the Farworld middle grade fantasy series and the Case File 13 middle grade monster series. He has published 19 books, visited more than 3,000 schools, and taught dozens of writing classes.
BOOK TRAILER

REVIEW
Savage has written a creative new take on Lewis Carroll's Alice's Adventures in Wonderland.  He throws two children into the crazy world of Wonderland.  As Celia and Tyrus make their way through the strangeness that is Wonderland, they also have to navigate their newly formed friendship as well as face their own strengths and weaknesses.  Celia and Tyrus make friends as well as enemies as they stumble their way along, realizing that something is wrong in Wonderland.  Can they find a way their way back home? Or will the monsters, Queen of Hearts, and personal conflict win the day?

Savage has blended quite well both the fantastic world of Wonderland with the real life troubles the Celia and Tyrus face such as bullying and dyslexia.  He keeps the major element from Carroll's original story while altering things enough to create a story that stands on its own.  I wasn't sure I'd like this at first as I've always found Alice's Adventures in Wonderland to be rather too strange for my taste.  But Savage has added enough amusing situations and events and his own creative twists to make the book entertaining and interesting.
2020 books middle grade fantasy Middle Grade Speculative Shadow Mountain