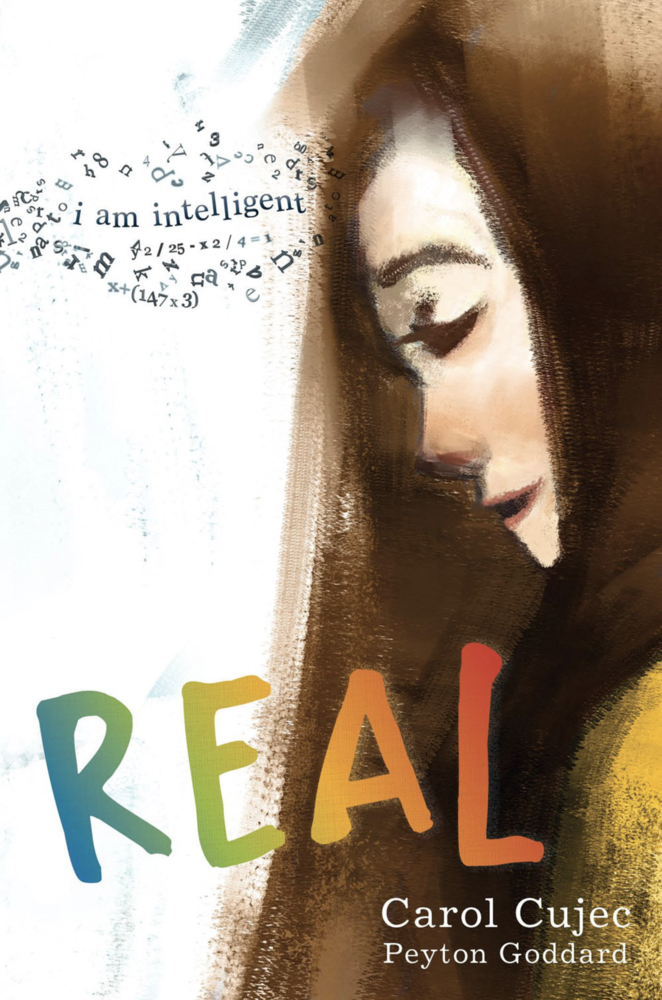 REAL
by Carol Cujec & Peyton Goddard
Shadow Mountain, 2021
ISBN: 978-1-62972-789-9
Source: publisher for review
Ages 9-12
All opinions expressed are solely my own.
ABOUT THE BOOK
Charity may have mad math skills and a near-perfect memory, but with a mouth that can’t speak and a body that jumps, rocks, and howls unpredictably, most people incorrectly assume she cannot learn. Charity’s brain works differently from most people’s because of her autism, but she’s still funny, determined, and kind. So why do people treat her like a disease or ignore her like she’s invisible?

When Charity’s parents enroll her in a public junior high school, she faces her greatest fears. Will kids make fun of her? Will her behavior get her kicked out? Will her million thoughts stay locked in her head forever? With the support of teachers and newfound friends, Charity will have to fight to be treated like a real student.

Inspired by a true story, Real speaks to all those who’ve ever felt they didn’t belong and reminds readers that all people are worthy of being included.
ABOUT THE AUTHORS
Carol Cujec, PhD, has worked as a writer and educator for more than two decades. Her own teaching and parenting experiences have given her welcomed insights into celebrating neurodiversity. Carol lives in San Diego with her husband, three children, and a mischievous orange tabby.
Peyton Goddard knows how it feels to be labeled as incapable of learning. For twenty-two years, her unpredictable body and inability to speak led people to assume she was mentally challenged. Once she gained a dependable mode of communication, not only did she learn, she graduated from college as valedictorian. Today, she is an advocate for inclusion who writes and presents about valuing all people and protecting those most vulnerable from abuse. Her message centers on “changing this worrisome world” through compassionate understanding and support for all. Peyton lives with support in her own apartment, adjacent to her parents’ home in San Diego.
REVIEW
Some books make for great entertainment but leave little mark otherwise.  Other books leave a permanent impression.  Real is one of the latter. Within a couple of chapters, I knew the book was going to be one I would never forget.  Based on the real-life experiences of one of the authors, the book has a genuineness to it that I really appreciated.  I felt empathy for Charity from the very first page as she explains the challenges of being thirteen, autistic and unable to speak or effectively control her body.  The image of a thirteen-year-old girl dressed like a five-year-old because she couldn't express her preferences was striking.  Reading about the way Charity is treated at Borden Academy infuriated me and about broke my heart.  I cheered right along with Charity when her mother discovered what was going on and removed her from that abusive situation.
Charity's struggles as she moves to a public school and faces the challenges of junior high on top of her already existing challenges are palpable.  Yet she never gives up on what she calls her "mission" of opening doors for others like her.  She experiences a lot of ups and downs as she meets people who support her and others who reject her for her differences.  As she finally gets a chance to express her thoughts and feelings through supported typing, her relief at finding an outlet is almost tangible.  With the assistance of many around her Charity joins the girls' basketball team, and is given the chance to participate in academically-challenging main stream classes.  Yet there are those who think she doesn't belong and attack her both to her face and on a gossip app.  Charity's final victory (in the book) comes when she chooses to stand up for herself with the help of her family and friends with her weaknesses on full display.
This is a book that I cannot recommend highly enough.  It's a book that took me on an emotional roller coaster ride, but left me feeling triumphant with Charity at the end.  It's a powerful reminder that all people have value and deserve to be included.  I also loved those who worked hard to help Charity find her voice, including her parents, teacher and aide (from the public school), and the students who befriended her.  I enjoyed reading about the kindnesses that were shown Charity that helped her along the way and the doors that were finally opened for her after thirteen long years trapped in an uncooperative body.  A great book and one that I recommend very highly.
2021 books 2021 favorites middle grade contemporary middle grade realistic fiction