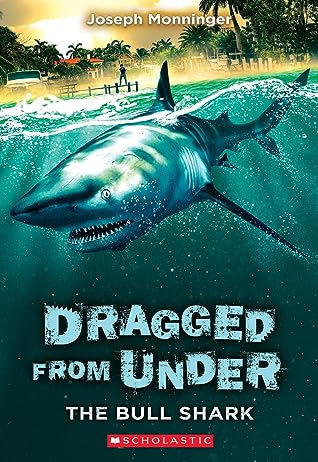 THE BULL SHARK
Dragged From Under #1
by Joseph Monniger
Scholastic, 2020
ISBN: 978-1-338-58766
Source: purchased
Ages 9-12
All opinions expressed are solely my own.
ABOUT THE BOOK
Barn Whimbril is a shark-obsessed sixth grader living in Florida. When a deadly shark attack happens in a canal near his home, he heads off to the scene. As he tries to figure out what has caused these bull sharks to become more aggressive, Barn will face several hazards both in and out of the water.
REVIEW
When a teenager is attacked by a shark in the local canal near his home in Florida, Barn Whimbril sets out to find out why.  After investigating the attack scene and saving a dog from a bull shark, Barn knows there's a serious problem with bull sharks in the canal.  With the help of his shark knowledge, his best friend, Finn's electronic genius, and cute Margaret Valley's good sense, Barn tries to figure out what has brought bull sharks up the canal.  Barn and his friends meet Jessup Sabine, a local Fish & Game Officer at the community meeting set to discuss the problem.  When a man shows up with a shark in his truck with a flip flop in its stomach, Jessup invites Barn to visit him the next day to find out the results.  Continuing his investigation, Barn comes across some information that could explain the sharks in the canal, but when he sets out to confirm his theory, he puts both himself and his friends in danger.
As a Shark Week aficionado I was interested when I came across this book.  I ended up being quite impressed.  Not only is the writing excellent, but it was refreshing to read about young people making good decisions (except for one).  The shark information was also spot on and blended well into the story.  The way the kids used their technology smarts to help solve the mystery was fun as well.  All in all, a great read for young shark lovers who enjoy a good science mystery.
middle grade realistic fiction