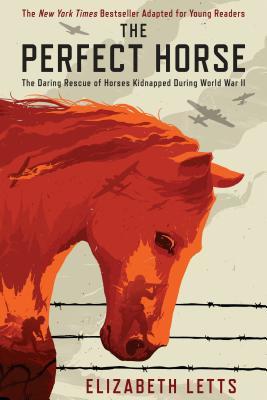 THE PERFECT HORSE
The Daring Rescue of Horses Kidnapped During World War II
The New York Times Bestseller Adapted for Young Readers
by Elizabeth Letts
Delacorte Press, 2019
ISBN: 978-0-525-64474-3
Source: purchased
Ages 12 and up
YA Narrative Nonfiction
All opinions expressed are solely my own.

In this young readers adaptation of Elizabeth Letts' New York Times bestseller, one American troop will save the world's most precious horses during the final stretch of World War II.

When a small troop of American soldiers capture a German spy, they uncover an unexpected secret: Hitler has kidnapped the world's finest purebred horses and hidden them in a secret Czechoslovakian breeding farm. But, starving Russian troops are drawing closer and the horses face the danger of being slaughtered for food. With little time to spare, Colonel Hank Reed and his soldiers cross enemy lines to heroically save some of the world's most treasured animals.

Elizabeth Letts details the truth of Hitler's eugenics program during World War II and shares the story of the courageous American troop dedicated to stopping it.

Letts presents young readers with a fascinating account of the rescue of some of world's most beautiful horses during the trying days of World War II.  Anyone who has seen the Disney movie (Miracle of the White Stallions) will be somewhat familiar with the story, but I loved discovering the details and reading about the men who risked a great deal to save the horses.  What was especially interesting to me was the way these men from different sides in the war cooperated to help the horses in the midst of horrific destruction.  Beauty from ashes in a manner of speaking.  This young reader's adaption focuses on the main people and events leading up to the horses being taken from their original homes and sent elsewhere as well as the efforts to send them home.  What I found kind of sad though was what happened to some of the horses after they came to the United States.  While a few found good homes, many were not accepted into the official breeding registries and little valued which led to their neglect.  I was happy to find brief descriptions at the end explaining what happened to some of the horses and men involved.  The photographs included added a lot to my appreciation of the men and horses at the heart of this story.  A great tale for horse lovers or those who like to see good things happen in the midst of war.
Horses Narrative Nonfiction YA Nonfiction