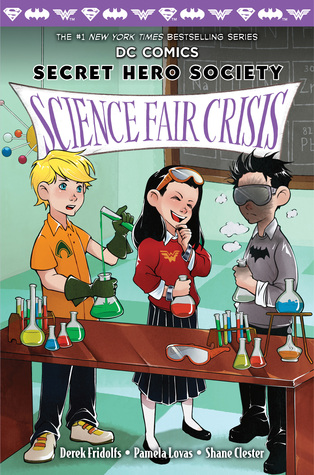 Clark Kent (Superman), Bruce Wayne (Batman), and Diana Prince (Wonder Woman) are starting a new school year at Justice Prep. This semester, everyone is focusing on their science projects: Principal James Gordon announced that the winner of the upcoming science fair gets an all-inclusive trip to the new S.T.A.R. Laboratories space facility. Who wouldn't want to win a trip to outer space? All the kids want to try their best to win.

As the fair draws closer, the students receive a text message from a mysterious, untraceable number saying: "if you help me, I can help YOU win the science fair!" Just who is behind this mystery number, and what do they have to do with the science fair? It's up to Clark, Diana, and Bruce's Junior Detectives Club to find out! With appearances from fan favorites like Arthur Curry (Aquaman) and Lex Luthor, plus all-new characters including Black Manta and Professor Zoom, this hilarious newest chapter in the Secret Hero Society saga is not to be missed!

This fourth book in the series has Clark and his friends attending a revamped school.  They have a new principal, James Gordon, who seems serious about making the school a solid place to be.  This will allow the students to focus on the upcoming science fair.  But someone is up to mischief, making a mess of the school, attacking some of the teachers, and sabotaging the students science fair projects.  Can Clark and the Junior Detectives Club find the culprit or will accusations break up the group before they can stop the damage?  This combination of graphic novel, letters, texts, and files of information makes for a light, fun read for superhero fans who enjoy seeing their favorite superheros as students like themselves.  The black-and-white illustrations are appealing and easy to follow. A fun series for young superhero fans. 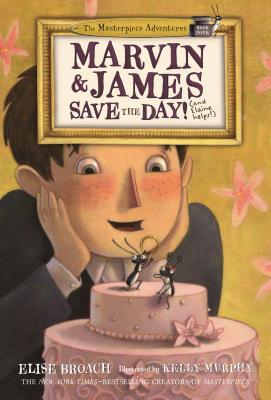 James's father, Karl, and Christina, his friend from the museum, are getting married! James is the ring bearer and he is excited but also nervous. He loves Christina yet he is worried about losing his dad to a different family and a different life. And what if, at the wedding, James drops the ring? His beetle best friend Marvin promises to help him, but Marvin ends up with an even more critical job when something goes wrong. Will the whole wedding be ruined? Not if Marvin and James and Elaine can help it.

This young chapter book for emergent readers captures the miniature world and friendship of Marvin the beetle and James. Complete with charming illustrations on every page by Kelly Murphy.

This fourth book in the early chapter book series sees James struggling to accept his father's remarriage.  It's up to Marvin and Elaine to help him adjust to the coming changes in his life.  And when the ring gets lost at the wedding, Marvin and Elaine step up to save the day.  This heavily illustrated series is a fun read for young readers who want a chapter book but still love their illustrations.  Marvin and James are great characters and their friendship is enjoyable to read about.  I especially enjoy seeing the details in the way Marvin and his family lives within James's much larger world.  A fun, early chapter book series involving some interesting adventures from the perspective of a much smaller Marvin, who proves that being small doesn't stop one from leaving a big mark on the world.
early chapter book favorite Early Chapter Books Favorite Series Graphic Novels Series Thursday