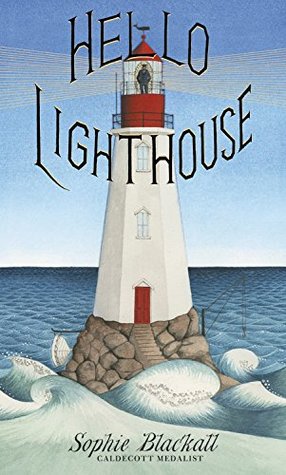 A new picture book that will transport readers to the seaside.

Watch the days and seasons pass as the wind blows, the fog rolls in, and icebergs drift by. Outside, there is water all around. Inside, the daily life of a lighthouse keeper and his family unfolds as the keeper boils water for tea, lights the lamp's wick, and writes every detail in his logbook.

Sophie Blackall has created a truly beautiful book in this tale of life in a lighthouse.  I'll admit I've been in a lighthouse, and I couldn't do it.  The limited space and unlimited time to yourself would get to me very quickly.  Of course, lighthouses are run automatically these days, but I thoroughly enjoyed reading about what it was like to live in a lighthouse years ago when that was necessary to keep them running.  Blackall's matter-of-fact text wonderfully complements the gorgeous illustrations that show the many different tasks that a lighthouse keeper had to master.  And yet despite all those tasks, there was much down time.  In the story, the keeper's wife comes to live with him, but their isolation is still clear as they go about their lives with little contact with other people, except when shipwrecked sailors are rescued.  A beautiful tale of a very different way of life from not so long ago. 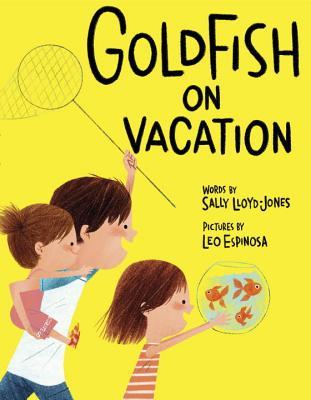 GOLDFISH ON VACATION
words by Sally Lloyd-Jones, pictures by Leo Espinosa
schwartz & wade books, 2017
ISBN: 978-0-385-38611-1
Source: school library
Ages 5 and up
All opinions expressed are solely my own.

From a New York Times bestselling author and a rising-star illustrator comes a humorous tale based on an amazing-but-true story about the summer a city fountain was used as a goldfish pond.

H, Little O, and Baby Em are stuck in the city for the summer with only their pet goldfish--Barracuda, Patch, and Fiss--for company. It's looking like it might be a pretty boring vacation, but one day, something exciting happens. Someone starts fixing up the old fountain down the street--the one Grandpa says horses used to drink from before everyone had cars--and a sign appears: "Calling All Goldfish Looking for a Summer Home." H, Little O, and Baby Em can't wait to send their goldfish on vacation, and the fish, well, they seem pretty excited too. Based on the true story of Hamilton Fountain in New York City, this charming tale of one special summer.

I quite enjoyed this cute story about summer in the city.  The three children live in an apartment building near an old un-used fountain.  But one summer the fountain is revamped and opened.  The neighborhood children are invited to bring their goldfish to the fountain for a 'vacation' from their small bowls.  In the process, the children get together and have a good time as well.  The story is a fun one about community and finding ways to enjoy whatever environment you might be in.  Of course, I'm pretty sure that the children don't get back the same goldfish they dropped off, but does it matter?  The illustrations are bright and attractive and complement the story nicely. 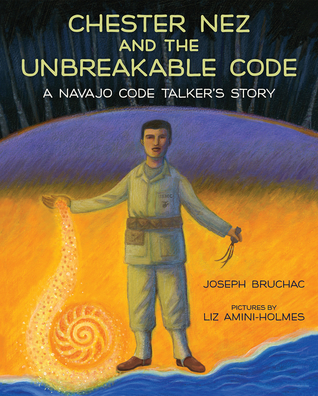 CHESTER NEZ AND THE UNBREAKABLE CODE
A Navajo Code Talker's Story
by Joseph Bruchac, pictures by Liz Amini-Holmes
Albert Whitman and Company, 2018
Source: school library
Ages 8-12
All opinions expressed are solely my own.

As a young Navajo boy, Chester Nez had to leave the reservation and attend boarding school, where he was taught that his native language and culture were useless. But Chester refused to give up his heritage. Years later, during World War II, Chester—and other Navajo men like him—was recruited by the US Marines to use the Navajo language to create an unbreakable military code. Suddenly the language he had been told to forget was needed to fight a war. This powerful picture book biography contains backmatter including a timeline and a portion of the Navajo code, and also depicts the life of an original Navajo code talker while capturing the importance of heritage.

This is an important story about sticking to your values no matter what.  And even better, it's a true story.  When young Betoli, a Navajo boy, is sent off to boarding school, he's told that his new name will be Chester.  Like so many Native children of the time, he faced a school telling him he needed to give up his culture in order to be successful in 'the white man's' world.  He wasn't allowed to use his language, he had to dress and look like a white boy, and he had to attend school in a place where his people suffered greatly.  But Betoli/Chester was a brave kid, and he chose to hold on to the things he valued, including his language and culture.  And his summers spent at home helped him to do so.  Later as he prepared to leave the school, World War II broke out.  Despite the way he had been treated during his school years, Betoli/Chester chose to fight for his country.  He ended up joining the Marines when they came looking for Navajo men who could speak both English and Navajo.  He joined a group of other Navajo speakers and helped create a code that the enemy couldn't break.  He then spent the rest of the war using the code to transmit messages.  His cultural traditions helped him survive the war as well as the combat fatigue (PTSS) he experienced when he got home.  A remarkable story about courage and faith and integrity, a story that reminds readers of the importance of choosing for oneself what to believe and how to live one's life.
picture books