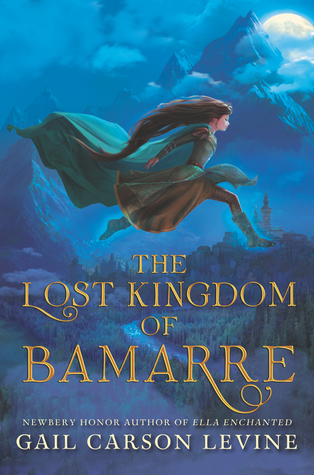 THE LOST KINGDOM OF BAMARRE
by Gail Carson Levine
HarperCollins, 2017
ISBN: 978-0-06-207467-6
Ages 9-12
Middle grade speculative (fantasy)
Source: ARC from publisher for review
All opinions expressed are solely my own.

In this compelling and thought-provoking fantasy set in the world of The Two Princesses of Bamarre, Newbery Honor-winning author Gail Carson Levine introduces a spirited heroine who must overcome deeply rooted prejudice—including her own—to heal her broken country.

Peregrine strives to live up to the ideal of her people, the Latki—and to impress her parents: affectionate Lord Tove, who despises only the Bamarre, and stern Lady Klausine. Perry runs the fastest, speaks her mind, and doesn’t give much thought to the castle’s Bamarre servants, whom she knows to be weak and cowardly.

But just as she’s about to join her father on the front lines, she is visited by the fairy Halina, who reveals that Perry isn’t Latki-born. She is Bamarre. The fairy issues a daunting challenge: against the Lakti power, Perry must free her people from tyranny.

It's been a long time since I've read The Two Princesses of Bamarre, but I knew that this would be a great read.  And I was not disappointed.  Levine's ability to take fairy tale motifs and turn them on their heads never ceases to amaze me.  I didn't the fairy tale elements in this one coming because I was so caught up in Perry's story and where it might end up.  It was fantastic to be surprised on several occasions in the book.  After reading so many fairy tale retellings, sometimes it gets old, but never with Levine and certainly not with this book.

Perry makes for a great main character, full of fight and determination.  But what makes the book especially interesting is the way she has to learn to harness that fire in order to truly come to understand the Bamarre and her family.  And it's honestly hard for her, as one would expect it to be.  The other characters in the book also have more depth than one might expect based on their actions at the beginning.  It was enjoyable to see the way the characters change, especially in the way Perry sees them.

The plot proves to be more intricate than I first thought it would be as Perry struggles to come to terms with her identity and the task the fairy has set her.  Relationship difficulties  mix quite well with the action sequences to create an entertaining as well as thoughtful read.  Themes of family, earning love versus unconditional love, as well as bias and prejudice of all kinds resonate strongly throughout the book without becoming didactic.  Another winner from a fabulous author.