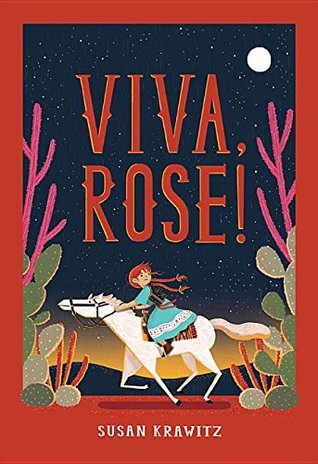 When fourteen-year-old Rose Solomon's brother, Abe, left El Paso, he told the family he was heading to Brooklyn. But Rose discovers the truth the day she picks up the newspaper at Pickens General Store and spies a group photograph captioned The Southwestern Scourge of 1915! There stands Abe alongside none other than Pancho Villa and his army!

Rose is furious about Abe's lie; fearful for his safety; and worried about her traditional parents who, despite their strict and observant ways, do not deserve to have an outlaw for a son. Rose knows the only way to set things right is to get Abe home, but her clandestine plan to contact him goes awry when she is kidnapped by Villa's revolutionaries and taken to his hideaway.

Deep in the desert, amidst a richly rendered assortment of freedom-seekers that includes an impassioned young reporter, two sharp-shooting sisters with a secret past, and Dorotea, Villa's tyrannical young charge, Rose sees no sign of Abe and has no hope of release. But as she learns to lie, hide, and ride like a bandit, Rose discovers the real meaning of freedom and what she's willing to risk to get hers back.


Rose is an appealing, spunky character, who is frustrated with her mother's nagging (and efforts to push her toward preparation for marriage even though she's only thirteen), and upset when she learns her adored older brother lied to her.  Her parents think Abraham is back east working with his brother, Eli.  Rose believes Abraham is out west working as a cowboy.  When she sees his picture with Pancho Villa, the outlaw, she's horrified and tries to hide the information from her parents.  When she decides to write to Abraham and let him know of her displeasure she has no idea the trouble it will get her into.

What Rose doesn't expect is to end up being snatched and taken to Pancho Villa's camp out in the desert.  Becoming the 'playmate' (basically defined as servant) to Villa's niece further confuses things. Rose's views of her brother's actions start to shift as do her views on her own place in the world and the value of her own freedom.  Having been babied her whole life, Rose spends a lot of time in the beginning blaming others for her difficult situation.  But finally she realizes that not even her brother can save her from this mess and she may just have to do something herself.

I've enjoyed the imagery that Krawitz has used in her writing as well as her depictions of the formerly Russian Jewish family as they live their life in El Paso, Texas.  It's even more impressive that the story is based on the author's own family history.  I've read a lot of historical fiction over the years, most of it focused on U.S. mainstream history.  It's refreshing to read about people and events that aren't as familiar to me.  The story is well-told and fun to read, although Dorotea, Villa's so-called niece, really made me angry with her antics, a sign of a well-written character.

For years, I had a recurring dream. I was walking through an abandoned house I knew was my grandfather’s, and though the roof was leaky and the floors were wobbly, the rooms were filled with incredible furnishings.

I see that dream now as a not-so-subtle nudge from my subconscious to write a novel I’d been spinning about a unique piece of my family’s history. My grandfather’s first cousins were Russian Jewish immigrants who’d settled in San Antonio, Texas. Redheaded Rose was said to have been an incredible singer, and Abraham, her brother, had ridden with Pancho Villa’s gang of banditos during the Mexican Revolution. The idea of a Jewish cowboy bandit stirred my imagination, but creating my middle grade novel Viva, Rose! would require far more information than a handful of family stories.

Balancing historical fact with historical fiction can be tricky. Situations and characters might spur the story’s start, but research has to fuel the rest of the ride. To begin, all I had were two intriguing characters and an exciting handful of whys and what-ifs. Why would cousin Abe leave his family to ride with Villa? What would it be like to travel with the Villa gang? And what if Abe’s little sister got somehow stuck in the middle of it all?

So I devoured books and pored over websites about the Mexican Revolution and the history of Jews in the West. I read archived newspaper articles. I visited Texas.

As the story evolved, I realized I’d need to change real-life elements in order to serve fictional ones. Rose and Abe’s home needed to be moved to the Mexican border town of El Paso so Rose could be involved. And though I added the real-life characters who made up Villa’s gang, they were not actually in his army at the same time.

Though the line between fact and fiction blurred, I tried to keep one thing constant: to maintain a radiant sense of the energy of the real places, the real issues, and the real people who inspired the story.

To me, this is the best purpose of historical fiction—to combine real and imagined elements to help present-day readers walk a long-ago path. And hopefully, ideally, the end result honors both what “really” happened and the bigger, more universal story created from it.

I’m not sure what my grandfather would have thought about this book. But I’ve stopped having the dream about his house.
Marvelous MIddle Grade Monday middle grade historical fiction