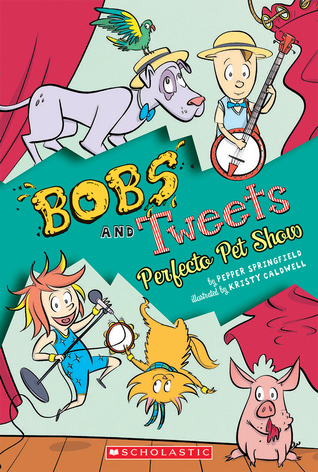 PERFECTO PET SHOW
Bob and Tweets #2
by Pepper Springfield, illustrated by Kristy Caldwell
Scholastic, 2017
ISBN: 9780545870733
Source: ARC from publisher for review
Ages 6-9
All opinions expressed are solely my own.

Get ready for one perfecto school pet show with the Bobs and Tweets!

Dean Bob and Lou Tweet can't wait to perform in the first-ever Bonefish Street Elementary School Pet Show. They've practiced their performances over and over again, and together with their pets, they're ready to shine!

But it looks like their families, the Tweets, who are neat, and the Bobs, who are slobs, aren't going to make getting to the show easy. What will happen when the Tweets and Bobs have a showdown before the show? And what if all that fighting makes Dean Bob too nervous for his performance? Find out in another wacky family saga full of pets, school antics, and two very silly families!

This second book in the Bobs and Tweets series is filled with full-color, illustrations and high-interest rhymes that's just right for reluctant readers. It's Dr. Seuss meets Captain Underpants wrapped into one zany school adventure! So go ahead, read and laugh with the Bobs and Tweets!

Lou Tweet and Dean Bob are friends, despite coming from families who are so different. Lou is the youngest of the seven Tweets and the only one who likes to be messy and impulsive.  Dean Bob is the youngest of the seven Bobs and the only one who is neat and shy.  Despite their differences, Lou and Dean are friends who walk to school together each day.  But when their teacher announces the upcoming Pet Talent Show both kids are worried.  Lou is worried the rest of the Tweets will come and sit in the first row too early.  Dean is worried his family will make a mess and be too loud.  And on top of that Dean has a serious case of stage fright.  And indeed the day of the show, disaster strikes, and Dean and Lou need to find a way to solve the problem before the show turns into another Tweets vs. Bobs free-for-all.  This series is quite funny with it's bright, colorful illustrations.  But their is some depth here revolving around friendship and learning to get along despite major differences.  The rhyming text makes for some interesting reading as well. 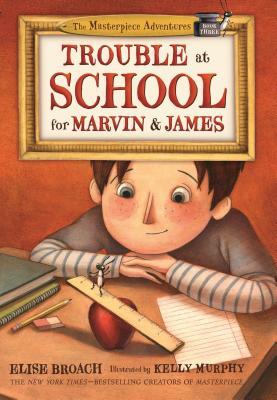 In this Masterpiece Adventure, the first in a companion series for younger readers from bestselling author Elise Broach, James is going on vacation for a week. His best friend, Marvin the beetle, has to stay at home. Without James to keep him company, Marvin has to play with his annoying cousin, Elaine. Marvin and Elaine quickly find themselves getting into all sorts of trouble—even getting trapped inside a pencil sharpener! Marvin misses James and starts to worry about their friendship. Will James still be Marvin's friend when he gets home or will James have found a new best friend?

Trouble at School for Marvin and James is the third book in one of my favorite early chapter book series. In this adventure, James is heading to school and invites his friend, Marvin the beetle to come with him. Impulsively, Marvin agrees to go, wanting to see the art teacher James has been telling him about.  And at first, Marvin has a delightful time as he helps James draw in art class and rides the globe in social studies. Lunch scares Marvin a little though with the noise and all the kids that he's afraid will notice him.  When disaster strikes and he ends up in the trash, Marvin is afraid that he will never see James again.  But with the help of a new friend, maybe he can find a way to make his way back to James.  The illustrations break up the text beautifully, making the book seem shorter than it is.  James and Marvin are great, likable characters that it's easy to relate too.  The theme of mistakes sometimes leading to new learning experiences doesn't overshadow the overarching theme of friendship.  This is a great series for young readers who are ready for more difficult text but still love plentiful illustrations mixed in.