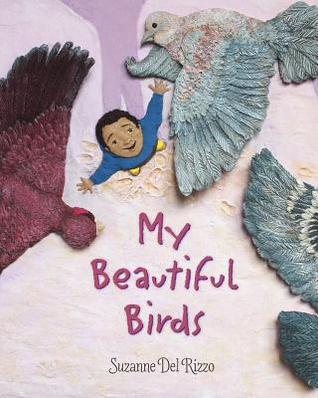 Sami, a young Syrian boy, is forced to flee his town when war arrives.  As he and his family settle in to the refugee camp, Sami can't help longing for the pigeons he left behind, his 'beautiful birds'.  He can't bring himself to get involved in school or even playing games with the other children, until he discovers that beauty can be found in even the most discouraging circumstances.

I think my favorite thing about this book though are the gorgeous illustrations. Using Plasticine, polymer clay, and other mixed media Del Rizzo has created illustrations that really pop out at you.  The story itself really touched my heart, especially with everything going on right now.  I mean, here we have a young boy who has lost his home, his pets, pretty much his whole world, and he grieves the loss, but when new birds fly into his life, he finds a reason to rejoice despite his humble circumstances. 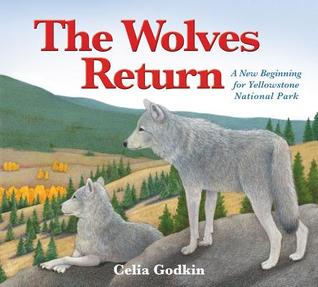 THE WOLVES RETURN
A New Beginning for Yellowstone National Park
by Celia Godkin
Pajama Press, 2017
ISBN: 978-1-77278-011-6
Ages 4-8
Source: publisher for review
All opinions expressed are solely my own.

Wolves have long held a place in the American West as a villain.  For ranchers and farmers, wolves threatened their livestock. Because of that they disappeared due to habitat loss and over-hunting.  It was only after they were gone that people began to realize their importance to the ecosystems in which they lived.  Due to the hard work and dedication of various scientists and organizations, wolves have returned to Yellowstone National Park.  Godkin documents the changes that have come about because of that act.  She focuses on the environmental changes that the wolves presence have brought about, including healthy and smaller herds of elk which has lead to an increase in trees and berries, which has lead to an increase in other wildlife including beavers and the cycle goes on. My favorite aspect of the book though are the beautiful illustrations that give the reader a peek into the natural world of the wolf.  The additional information and photographs at the end of the book are certainly a great boon for teachers and other users who want to know more about the topic. 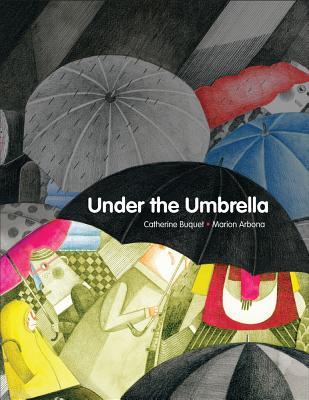 UNDER THE UMBRELLA
by Catherine Buquet and Marion Arbona
translated by Erin Woods
Pajama Press, 2017
ISBN: 978-1-77278-016-1
Source: publisher for review
All opinions expressed are solely my own.

A man walks through town feeling incredibly grumpy.  The dark sky and flowing rain don't help his mood any.  At the same time, a young boy ignores the weather to gaze with yearning at a window full of delicious looking baked goods.  When the man encounters the boy, his outlook starts to change.  And when they share a yummy treat under the umbrella, they discover that the weather hardly seems to matter at all.

I loved the message of this book, that what we bring to the world is more important than what the world brings to us.  While the illustrative style isn't particularly appealing to me, I did appreciate the use of color and shape to convey the mood of the characters and the story.  The story begins with mostly sharp angles and dark colors until the boy is introduced when light, bright, cheerful colors reign supreme.  The contrast between the man's mood and the boy's shows brightest in the contrasting light and dark shades. And the way the light spreads into the dark demonstrates the message of the story far beyond the ability of the text to do so.