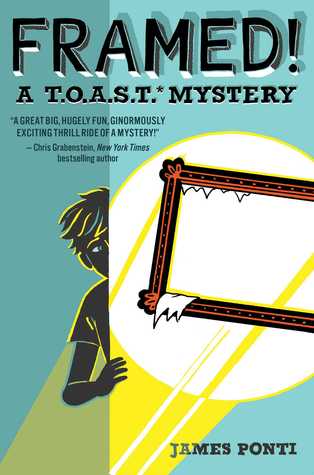 Get to know the only kid on the FBI Director’s speed dial and several international criminals’ most wanted lists all because of his Theory of All Small Things in this hilarious start to a brand-new middle grade mystery series.

So you’re only halfway through your homework and the Director of the FBI keeps texting you for help…What do you do? Save your grade? Or save the country?

If you’re Florian Bates, you figure out a way to do both.

Florian is twelve years old and has just moved to Washington. He’s learning his way around using TOAST, which stands for the Theory of All Small Things. It’s a technique he invented to solve life’s little mysteries such as: where to sit on the on the first day of school, or which Chinese restaurant has the best eggrolls.

But when he teaches it to his new friend Margaret, they uncover a mystery that isn’t little. In fact, it’s HUGE, and it involves the National Gallery, the FBI, and a notorious crime syndicate known as EEL.

Framed! had everything that I love about a middle grade mystery.  Great characters! Interesting plot with twists and turns!  And most important of all, a connection to Sherlock Holmes!  Florian Bates uses his T.O.A.S.T. theory to figure people out and solve mysteries.  His Theory of All Small Things states that life can be figured out by paying attention to the small details.  He uses his theory to make friends as well as figure out the best ways to survive middle school.  Moving around frequently with his parents leaves Florian plenty of time to put his theory into action.  But when he meets Margaret and uses his theory to figure her out, she is enthralled with his techniques.  And when they visit the National Gallery where Florian's parents work, they put T.O.A.S.T. into action figuring out all they can about the other visitors.  One visitor in particular stands out though, especially when he shows up more than once under unusual circumstances.  None of that means anything though until Florian finds out that the museum has been robbed. Florian goes with his father to see if he can help figure out the mystery.  And Florian solves the mystery within a couple of hours which catches the eye of the FBI.  But there turns out to be more to the mystery than was originally thought which leads Florian and Margaret deeper into what turns out to be a rather dangerous set of conditions.  Florian and Margaret are fun characters, each with their own quirks.  T.O.A.S.T. turns out to be a rather fascinating way to see the world and the mystery itself takes several sharp turns (including a kidnapping, a mob boss, and a forgery).  This is a fabulous new series for young readers who enjoy a good mystery with dabs of humor spread throughout. 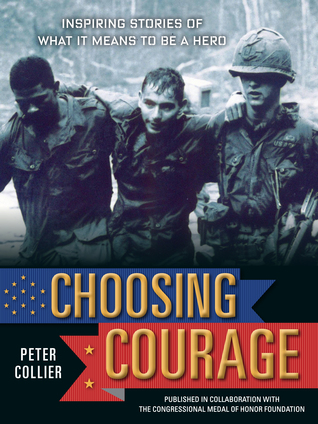 CHOOSING COURAGE
Inspiring Stories of What it Means to Be a Hero
by Peter Collier
Artisan, published in collaboration with The COngressional Medal of Honor Foundation, 2015
ISBN: 978-1-57965-596-9
MG/YA Nonfiction
Ages 12 and up
Source: purchased
All opinions expressed are solely my own.


What turns an ordinary person into a hero? What happens in the blink of an eye on a battlefield (or in any dangerous situation) to bring out true courage? The men and women who have been recognized by the Congressional Medal of Honor Foundation know the answers to these questions deep in their hearts. We learn of Jack Lucas, a 13-year-old who kept his real age a secret so he could fight in World War II—where he deliberately fell on a grenade to save his buddies during the Iwo Jima invasion—and Clint Romesha, who almost single-handedly prevented a remote U.S. Army outpost in Afghanistan from being taken over by the Taliban. Also included are civilians who have been honored by the Foundation for outstanding acts of bravery in crisis situations: for example, Jencie Fagan, a gym teacher who put herself in danger to disarm a troubled eighth grader before he could turn a gun on his classmates. Adding depth and context are illuminating sidebars throughout and essays on the combat experience and its aftermath: topics such as overcoming fear; a mother mourning her son; and “surviving hell” as a prisoner of war. Back matter includes a glossary and an index.

Peter Collier has collected some amazing stories in this book about heroes.  While many of the accounts shared focus on recipients of the Congressional Medal of Honor, there are some that don't.  The stories about ordinary people who do extraordinary things are particularly touching, such as the middle school teacher who talks down an armed fourteen-year-old, putting her own life on the line for her students.  These kind of stories I find particularly touching in the face of modern day celebrity worship.  The men and women whose stories are told in this book make sacrifices that in many cases are very costly to themselves.  Throwing oneself on top of a grenade to save one's comrades, leaping through heavy gunfire to rescue an injured buddy, enduring years of torture with honor, stepping forward to serve your country after being confined to an internment camp.  It's impossible to read these stories without being touched by the individuals who experienced them.  One commonality among these individuals is that none of them see themselves as a hero, and yet all of them did heroic things.  Since many of these stories involve warfare, there is all too much violence depicted in both actual combat, torture, and recovery, as well as death.  A powerful collection of stories demonstrating the power of sacrifice and courage in doing one's duty.
Favorites Marvelous MIddle Grade Monday MG/YA Nonfiction Middle Grade Favorites Middle Grade Mystery nonfiction favorites Nonfiction Monday