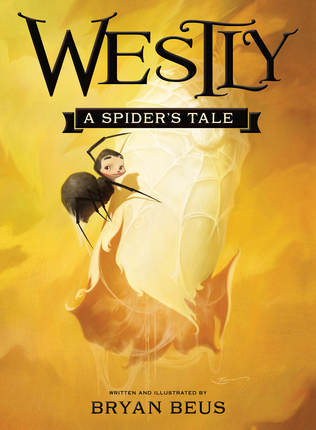 When Westly emerges from his cocoon, not as a beautiful butterfly, but as a spider, he is rejected by the butterfly kingdom and undertakes a journey to discover who he really is. But not even the dirt eaters can offer him answers. Not the dragonfly, the centipede, the moth, or even Zug Zug, the fly. None have ever seen an eight-legged creature who can spin webs. However, Westly's new friend the Raven has offered to help. If only the Raven could get inside the glass menagerie where Westly and the other bugs live. Yes, yes, the Raven is sure he could change everything. But sometimes things don't turn out the way we plan.

Delightfully illustrated by the author, Westly: A Spider's Tale is a story about discovering one's true potential, learning that being different is not a bad thing, and that even misfits can grow up to be heroes.

In a sweet story about finding one's place and overcoming mistakes, Westly takes the reader from the beautiful chandelier where the butterflies live to the dirt far below where the gardeners live and work.  Westly starts the story as a puny young caterpillar looking forward to his changing day.  As the son of the ruling Monarch butterfly, he is used to being treated as royalty.  But when his changing turns him into a spider he runs away feeling like he no longer belongs.  But he doesn't really feel like he belongs below with the 'dirt eaters' either, at least not until Raven starts teaching him about what it means to be a spider.  Westly longs to return the favor for his friend Raven, but it turns out that Raven has other motives and Westly has to race to undo his mistake.  Not only is this a great story about growing up and finding one's place in the world, it's also a story about the power of differences and learning to work together.  The illustrations included by the author add a really nice touch (Westly is the cutest spider I've ever seen).  This is a great book for young readers who enjoy animal stories or stories about growing up and making mistakes.  I thoroughly enjoyed this one, although there were times when I wanted to give Westly some advice seeing as how he doesn't really have anyone to help him once he leaves home.  Like many of us, Westly learns a lot the hard way despite his best efforts.
Deseret Book Blog Tour Marvelous MIddle Grade Monday MG Science Fiction/Fantasy middle grade animal fantasy