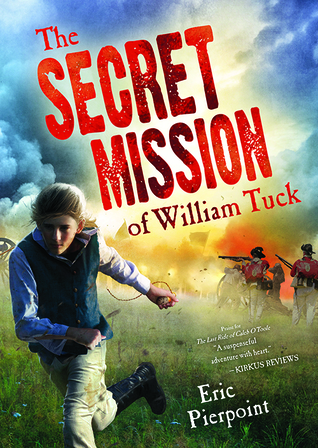 William Tuck is set on justice. For his brother killed by British soldiers, for his friend Rebecca’s father held prisoner by the redcoats, and for the countless other rebel Americans struggling beneath the crushing weight of British rule.

The whispered words of a dying soldier and a mysterious watch give William all the ammunition he needs: a secret message for the leader of the rebel army. Rebecca disguises herself as a boy, and she and William join the American troops. They embark on an epic journey that pulls them into a secret network of spies, pits them against dangerous gunmen, and leads them on a quest to find General George Washington himself.

Can William and Rebecca determine friend from foe long enough to deliver a message that might just change the tide of the American Revolution?

Eric Pierpoint is a veteran Hollywood character actor who’s begun a writing career with several screenplays in development.His ancestors came west on the Oregon Trail in the mid 1800s, so Eric and his dog, Joey, followed in their wagon wheel tracks and traveled cross-country researching The Last Ride of Caleb O’Toole. Visit www.ericpierpoint.net

The Secret Mission of William Tuck is one of the most exciting historical fiction books I've read in quite a while.  From the moment William sees his brother killed and then runs off to join the patriot army, the action hardly lets up.  When William inadvertently becomes a courier for a very important message things get even more exciting as he and his new ally, Rebecca (posing as Robert) set off to see the message delivered.  But they have to wend their way through some very dangerous situations.  The author does a nice job of integrating information from the time period into the story in a very unobtrusive way as William learns a bit more than he wanted to know about the spy/courier trade and it's dangers.  The scene where William and Rebecca come across a slave being punished was a bit shocking but sadly accurate (William insists they help).  "Hooking" wasn't a form of punishment that I was familiar with before reading this book and I found it a horrifying prospect (luckily, William and Rebecca manage to stop it before it happens).  Because of this scene and other scenes involving death, I would say this book is most appropriate for older middle grade readers (5th grade and above).  But the integration of facts from history with the struggles of William and Rebecca make for a very compelling story that moves surprisingly quickly as the two run into crisis after crisis (thank goodness for two strong horses and some allies along the way).  For readers fascinated by the American Revolution and the important role that spies and couriers played in it, I can highly recommend this book.

Excerpt from The Secret Mission of William Tuck:

William! No!” screamed his mother, Martha, as William broke out of her grasp. He leaped from the porch of their farmhouse and ran toward his brother, who stood surrounded by redcoats on horseback over by the freshly plowed field at the edge of the woods. “Dear God! William!”
Still dressed in her yellow dress and white bonnet, her arms covered in flour, she bent down to help her burly husband, Benjamin Tuck, who lay still after being shot in the leg by a soldier of the British procurement troops. Bo, the old family bloodhound, howled from the end of his rope, which was tied to the front stoop.
“Asher!” cried William. He raced along the wooden fence that held the family livestock, past two British supply wagons. Four black men, dressed in shirts with the words “We Are Free” written in red paint across their fronts, had begun to slaughter the Tucks’ hogs and chickens and load the carcasses. Former slaves promised their freedom by the British, they went about their bloody business with axes and clubs.
William ran as fast as his legs could carry him across the field, past the bodies of three British soldiers and Asher’s fallen friend, a fellow member of the Virginia militia. The battle had been short and deadly. What had begun as an argument had ended in an explosion of muskets. Asher, a crack shot with his Virginia rifle, had killed two of the twenty British soldiers who had come to take the family livestock for General Cornwallis’s army as he rampaged through the southern colonies.
A British captain stood pointing an accusing finger at Asher. The brass buttons on the officer’s red uniform coat gleamed in the sunlight. The black feather cockade of his dragoon helmet pointed straight up into the blue of the hot June sky.
Suddenly, the captain slapped Asher across the face with his glove, knocking his tricorn to the ground. He barked an order, and ten redcoats quickly dismounted and began to drag Asher to the nearby woods. Hopelessly outnumbered, Asher did not resist but stood proud and defiant as the soldiers tied him to a tree.
“Form up!” ordered the captain. He then marched arrogantly over to his men as they lined up to form a firing squad. The soldiers began to check and load their muskets.
“I, Captain Barrington Scroope, humble servant of His Majesty, King George III, do hereby sentence you to death for crimes against the Crown.” Scroope drew his saber. “May God have mercy on your soul.”
“No!” choked William, tears streaming down his cheeks.
“William! Stay back!” called Asher.
“Make ready!” commanded Scroope as he raised his sword above his head. In perfect unison, the ten soldiers brought their Brown Bess muskets up into position and pulled back the cocks.
“Present!” The redcoats took aim. Captain Scroope waited, as if relishing his power.
William sprinted, his feet flying over the ground.
Seeing William running toward his brother, Scroope cocked his head slightly and smiled with false pity—-the saber scar that ran down the left side of his mouth turned it into a ghoulish grin.
“Asher!” cried William desperately, racing to get to his brother’s side. As he reached the firing squad, one of the redcoats swiftly turned and smashed his musket into the side of William’s head. William fell to the ground as blinding pain shot through his body. Blood began to pour from his scalp and drip into his eyes, and his ears rang as he tried to find Asher.
“Fire!” Scroope sliced the air with his sword. Asher turned his gaze from his younger brother and faced his death. The crash of ten muskets ripped the air and tore the heart right out of William Tuck.