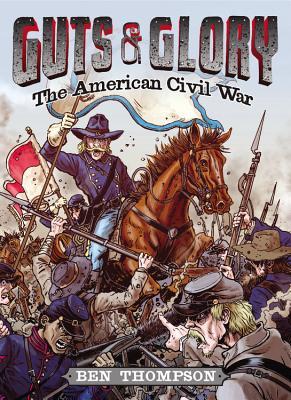 From courageous cavalry rides deep into enemy territory to harrowing covert missions undertaken by spies and soldiers, the events of the American Civil War were filled with daring figures and amazing feats. This exhilarating overview covers the biggest battles as well as captivating lesser-known moments to entertain kids with unbelievable (and totally true) tales of one of America's most fascinating conflicts.

History buff, Civil War reenactor, and popular blogger Ben Thompson uses his extensive knowledge and vivid storytelling style to bring the Civil War to life in this first book in a thrilling new series featuring incredible people, events, and civilizations. Get ready to learn just how awesome history can be!

I have some mixed feelings about this book.  On the one hand it has tremendous young reader appeal but on the other hand there were a few statements that I felt were misleading though not technically wrong.  On the one hand the list of resources the author read and used at the end was tremendous, some specific references on certain information would have been nice.  And while I enjoyed the author's rather snarky, sarcastic tone, I wonder if all children will pick up on it, especially the references to things that did not exist during the Civil War, which could easily confuse some child readers.  That tone also seemed to make light of the seriousness of battle.

The author has done a nice job of choosing topics and events that carry a lot of interest.  I found myself compelled to keep reading to find out what else the author had to say.  I even learned some things, which for a Civil War reader like myself says a lot.  The numerous sidebars provide information about topics related to each chapter giving additional information and background.  For each major battle, statistics related to the number of soldiers involved and the casualties inflicted as well as who is considered to have 'won' the battle are included.

While I didn't read anything that was technically incorrect (at least as far as I know) there were several places (at least three that I counted) where things were phrased in such a way as to be misleading.  For example, on page 55 the author says, "On November 7, 1917, Communist supporters of Vladimir Lenin stormed the palace of Tsar Nicholas II, killing the Russian emperor and his entire family and beginning a civil war that would spread across the country."  While technically that is correct, the Russian emperor and his family were at the SUMMER PALACE when the revolution first began, and while they were killed it wasn't until months later.  So, technically correct but misleading.  A reference to 'Mormon separatists' on page 41 is also misleading in that the Mormons moved to what later became the state of Utah in order to avoid ongoing religious persecution and not to establish a separate country makes this misleading.

The illustrations add a nice touch but like most illustrations of battles they involve a good deal of supposition on the part of the illustrator because we have few if any actual battle photographs from the Civil War, though quite a few of the aftermath.  But the pictures definitely add to the appeal of the book.

Overall, an engaging book that child readers fascinated by the Civil War are bound to enjoy, but I recommend it with reservations.
history MG/YA Nonfiction Nonfiction Monday