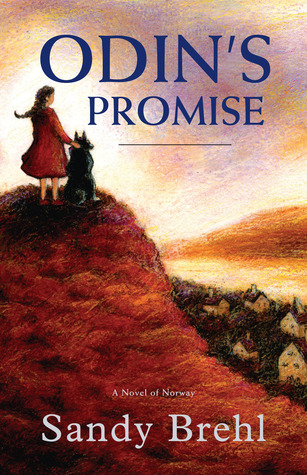 Odin’s Promise is historical fiction for middle-grade readers, a novel depicting the first year of German occupation of Norway as seen through the eyes of a young girl.

Eleven-year-old Mari grew up tucked safely under the wings of her parents, grandma, and her older siblings. When Hitler’s troops invaded Norway under the guise of “occupying a friendly country,” she is forced to grow beyond her “little girl” nickname and comfortable patterns to deal with harsh new realities.

At her side for support and protection is Odin, her faithful elkhound.

After she witnesses a terrifying event on the mountainside, truths are revealed: the involvement of her family and friends in the resistance; the value of humor in surviving hard times; the hidden radio in her grandma’s cottage.

Odin, not one for quiet resistance, makes an enemy of soldiers who patrol the area.

The year will bring many challenges, as Mari confronts danger, develops her inner strength and voice, and finds she is able to endure hardship and heartache.

Books have been a central part of Sandy's life since bedtime read-alouds with siblings. Reading and writing with and for her students during her long teaching career led to some publications in magazines and journals.
When Sandy retired from teaching and joined SCBWI (Society of Children's Book Writers and Illustrators) she gained a critique group and took part in professional workshops and conferences. The development of her writing craft and extensive research led to the publication of Odin's Promise.

Sandy hosts a blog about the use of picture books for all ages at http://unpackingpicturebookpower.blogspot.com/.

I found Odin's Promise to be a beautifully told story of courage and perseverance in the face of immense challenges. Mari's very appealing as a main character, an eleven-year-old girl whose 1940 Norwegian village has been taken over by the Nazis. She struggles to adjust to the often frightening changes in her world. But through it all her beautiful Norwegian elkhound, Odin remains by her side. But after Odin makes enemies of some of the soldiers, Mari really starts to worry about how she and her family will survive.

I'll admit that one of the first things I did after I started reading the book was look up Norwegian elkhounds on the internet. I wanted to know what they looked like. As you can see from the picture above (from the American Kennel Club website), they are beautiful dogs.  Odin, it turns out is mostly black with white only on the tips of his paws and the tip of his tail. I confess I fell in love with Mari and Odin's relationship from the first page.

Not only is this a sweet story about the relationship between a girl and her dog, but also the strength of the human spirit in finding ways to keep one's hope up in the face of sometimes heart-breaking circumstances. For those who enjoy historical fiction, I can heartily recommend this one!

Thanks to the author, I have one copy to give away!
Enter below.