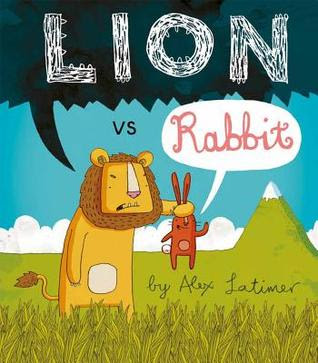 LION VS. RABBIT
by Alex Latimer
Peachtree Publisher, 2013
ISBN: 978-1-56145-709-0
Picture Book
Grades K-3
Review copy provided by publisher in return for honest review.
All opinions expressed are solely my own.

Lion bullies all the other animals until finally they can't take it anymore. They post an ad, asking for help. One animal after another tries and fails to defeat Lion. Can no one stop him? Finally, a rabbit arrives. No one thinks that such a small animal will be brave enough or strong enough to defeat Lion. But perhaps this rabbit is smart enough?

Alex Latimer lives near the border of a national park so when not writing or drawing, he spends his free time shooing baboons out of his lounge. The Boy Who Cried Ninja is his first book for children. He lives in South Africa.

Bullying has become a topic of great interest and as such has inspired many books about it.  I quite enjoyed this one because it is not only humorous but a great opportunity to discuss problem solving and fairness. The first thing that I found interesting is that the animals being bullied refused to deal with the problem themselves, instead that sought someone else to help them. Now in a lot of cases this is necessary, it depends on the situation and the people involved, but this is a great opportunity to talk to children about how the situation could have been solved by the animals themselves if they had worked together.

Another thing I noticed about the book was that the first attempts to 'defeat' the bully were all physical, and unsurprisingly the lion wins them all, until the rabbit shows up. But the rabbit uses his brain to defeat the lion over and over again.  The main theme here I believe is the power of working together to overcome obstacles.  The illustrations are very child friendly and appealing.  Recommended.