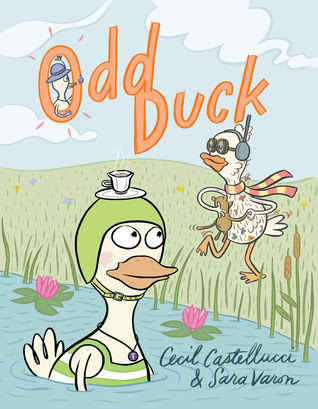 Theodora is a perfectly normal duck. She may swim with a teacup balanced on her head and stay north when the rest of the ducks fly south for the winter, but there's nothing so odd about that. Chad, on the other hand, is one strange bird. Theodora quite likes him, but she can't overlook his odd habits. It's a good thing Chad has a normal friend like Theodora to set a good example for him. But who exactly is the odd duck here? Theodora may not like the answer. Sara Varon (Robot Dreams) teams up with Cecil Castellucci (Grandma's Gloves) for a gorgeous, funny, and heartwarming examination of the perils and pleasures of friendship.

I was a little bit surprised at how much I enjoyed this book.  I thought the illustrations were darling with lots of humorous details.  The characters were oddly endearing with their various quirks. I found the story a refreshing take on the often told friendship tale.  Theodora is really uncertain about Chad when he first moves in next door, he does everything so strangely, and yet when she discovers that he too loves looking at the stars, she realizes that she's found a kindred spirit.  When they overhear someone referring to an 'odd duck' they each assume it was a reference to the other and they have a fight, because neither considers his/herself odd.  But as Theodora thinks about it she realizes that some of her habits are a bit  unusual and that she misses Chad.  I liked the way the characters took time to think about the problem before deciding that it was okay to be odd and that they liked being friends. Not only a cute story but a great theme involving accepting differences and solving problems. I think children will find the story amusing and enjoyable. Highly recommended.