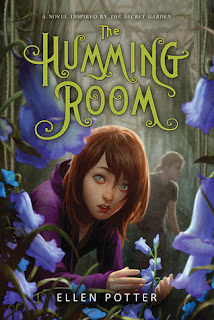 BLURB: Hiding is Roo Fanshaw's special skill. Living in a frighteningly unstable family, she often needs to disappear at a moment's notice. When her parents are murdered, it's her special hiding place under the trailer that saves her life.

As it turns out, Roo, much to her surprise, has a wealthy if eccentric uncle, who has agreed to take her into his home on Cough Rock Island. Once a tuberculosis sanitarium for children of the rich, the strange house is teeming with ghost stories and secrets. Roo doesn't believe in ghosts or fairy stories, but what are those eerie noises she keeps hearing? And who is that strange wild boy who lives on the river? People are lying to her, and Roo becomes determined to find the truth.

Despite the best efforts of her uncle's assistants, Roo discovers the house's hidden room--a garden with a tragic secret.

Inspired by The Secret Garden, this tale full of unusual characters and mysterious secrets is a story that only Ellen Potter could write.

Roo as a character is much more likable than Mary Lennox is at first.  Roo has clearly been neglected most of her life, but she's found a way to cope.  Her love of and connection to the earth is clear from the beginning.  I immediately felt empathy for Roo as she does her best to hide from the tragic changes that come her way.  Her confusion and suspicions when she first arrives at her new home are almost tangible.  I found myself cheering for her stubbornness in trying to find answers to the many questions that she has about her new home.  I also found myself connecting with the other children in the story, Jack (the Dicken character), and Philip (Colin).  Jack is a fascinating character, similar to Dicken in some ways, very different in others (the long hair, the mysterious background, and homelessness).  Philip engenders both sympathy and annoyance much as Colin does in the original story. The Martha character provides a nice humorous touch to the story.

I think my favorite part of this story though is the setting.  With a geography background, setting is for me a very important part of the books I read.  Potter does a good job creating an interesting setting, I mean an island out in the St. Lawrence River, a garden hidden within an old sanitarium.  How could Roo not be curious about such a place.  As Roo comes to love her new home, so does the reader.  I really wanted to be with Roo as she explored her new home and took trips with Jack on the river. The addition of Philip's mother being from Brazil adds a nice spice to the story as well.
The book is well done in most respects.  There were a couple of things that could have been done better.  The character development of Philip and his father for example could have been stronger.   Just as I started to really get to know them as characters, the book ended.  I would also have liked to see more about Jack and his background.  Reading this, I didn't feel the depth of story that I feel reading The Secret Garden, but overall the story is well done and I feel comfortable recommending it.
2012 Books Adventure Book Reviews Environment Family Geography Great Teaching Books Middle Grade Science Wild and Wonderful Wednesday