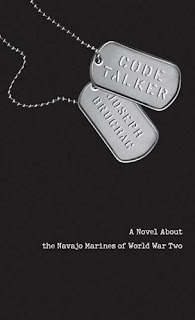 Code Talkers: A Novel About the Navajo Marines of World War II
by Joseph Bruchac
Dial Books, 2005
Grades 5 and up
Reviewed from copy borrowed from school library.

Native Americans have long been under appreciated, along with African Americans and other minority groups, for the contributions they have made to the development and survival of the United States.  During World War II as the war in the Pacific was heating up, the Americans desperately needed a way to send and receive messages that the Japanese couldn't intercept and interpret.  The Navajo language offered the best solution.

This historical fiction novel follows the experiences of Ned Begay as told to his grandchildren many years after the fact.  He starts by explaining his experiences at a boarding school where the teachers did everything they could to strip the students of their Navajo identity.  Ned survives by becoming the model student, on the outside, but sneaking around with some of the other students, he manages to keep his language skills.  Later, as he works his way through high school dealing with racist treatment all the way.  But he decides he wants to serve his country.  He convinces his parents to let him join the Marines at the age of sixteen.  He becomes a code talker and used his language skills to communicate through some of the worst fighting of World War II.

A fascinating look at a part of history that is often overlooked, directing well-deserved attention to those who provided a vital service at an important time in our history.  Bruchac does a fine job of honoring those who have so long deserved the recognition.  The detail he provides gives the reader an idea of the horrific loss of life that occurred during World War II.  The writing is solid, just like Ned Begay.  This book combines well with a nonfiction book about the history of codes and the sending of coded messages. 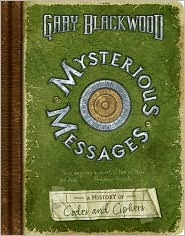 Mysterious Messages: A History of Codes and Ciphers
by Gary Blackwood
Dutton Children's Books, 2009.
Grades 5 and up
Reviewed from personal copy.

Sending secret messages is a interesting topic for most kids.  This book provides a great introduction to the topic and provides plenty of opportunities to practice one's deciphering skills. Blackwood starts with Ancient Greece and the first hidden messages. He then goes through a variety of strategies used over the last several thousand years, including the Navajo code talkers.  A well written, fascinating study of an always popular topic.  For those who have the time, I recommend deciphering the codes from each chapter.

These two books provide an interesting way for teachers to show students that history is anything but boring.  It would be fun to see how fast the students could decode some of the messages.
American history Book Reviews Historical fiction Middle Grade Mix N' Match Monday nonfiction Realistic Secondary grades