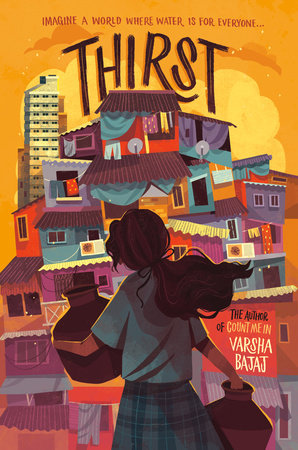 THIRST
by Varsha Bajaj
Nancy Paulsen Books, 2022
ISBN: 978-0-593-35439-1
Source: purchased
Ages 9-12
All opinions expressed are solely my own.
Book cover & summary provided by the publisher through goodreads.com.
ABOUT THE BOOK
The riveting story of a heroic girl who fights for her belief that water should be for everyone.
Minni lives in the poorest part of Mumbai, where access to water is limited to a few hours a day and the communal taps have long lines. Lately, though, even that access is threatened by severe water shortages and thieves who are stealing this precious commodity—an act that Minni accidentally witnesses one night. Meanwhile, in the high-rise building where she just started to work, she discovers that water streams out of every faucet and there’s even a rooftop swimming pool. What Minni also discovers there is one of the water mafia bosses. Now she must decide whether to expose him and risk her job and maybe her life. How did something as simple as access to water get so complicated?
REVIEW
This amazing book follows the experiences of a young girl growing up in the slums of Mumbai, India.  As the story opens, Minni and her beloved older brother Sanjay are sitting on a hill overlooking the Arabian Sea, admiring a bridge and talking about their dreams for when they grow up.  Despite living in a poor neighborhood where the small homes are built almost on top of one another, and despite having the gather water each day from the local tap, Minni and her brother maintain a hopeful outlook.  Minni hopes to finish school and get a good job to help support her family. Sanjay currently works at a restaurant, but hopes to eventually become a chef.  But a dangerous encounter with the water mafia puts Sanjay's dreams on hold as he has to flee the neighborhood for safety.  And Minni's school dreams take a dive when her mother gets sick and she has to fill in at her job cleaning for a rich family.  And even winning a scholarship to attend a computer class doesn't make things any easier.  Just when Minni rediscovers her hopes and dreams, she runs into a water thief.  She is left wondering what the right thing to do is?  Keep her mouth shut to protect her family and let the water thief continue to rob the neighborhood, or put herself at risk by saying something?  Bajaj has created endearing characters who immediately drew me into their story.  Minni's optimism, her sweet relationship with her family, and the firm friendship she has with her best friend Faiza all help carry her through some enormous challenges.  The easy-to-read writing and the under 200 pages length make this an even more attractive package.  I love stories like this one that provide a window to a world very different than my own. I look forward to sharing this great book with my students for many years to come.
#MMGM 2022 books 2022 favorites Marvelous MIddle Grade Monday middle grade contemporary middle grade global literature middle grade realistic fiction