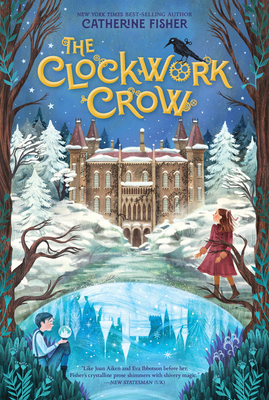 THE CLOCKWORK CROW
by Catherine Fisher
Walker Books, 2020
ISBN: 978-1-5362-1491-8
Source: ARC from publisher/finished copy purchased
Ages 9-12
All opinions expressed are solely my own.
ABOUT THE BOOK
Orphan Seren Rhys is on her way to a new life at the remote country mansion of Plas-y Fran when she is given a package by a stranger late at night in an empty train station. The package contains a crotchety, mechanical talking crow, which Seren reluctantly brings to her new home. But when she gets there, the happy Christmas she had hoped for turns out to be an illusion--the young son of the house, Tomos, has been missing for almost a year, rumored to have been taken by the fairies. With the Crow's reluctant help and a little winter magic, Seren sets off on a perilous journey to bring Tomos home.
REVIEW
As Seren waits for her train to arrive, she's surprised to notice a thin, scared-looking man holding a paper-wrapped package.  When the man leaves to investigate sounds he hears outside, he asks Seren to watch the package.  When he doesn't return she takes the package with her to her new home in the Welch countryside.  As an orphan, she's been dreaming about what her new home will be like, but she's shocked when she realizes the conditions under which she is expected to live.  The manor house is mostly shut down with only a handful of servants to run the place.  The family is nowhere to be found, which Seren finds strange.  As she starts poking around, she realizes that something has happened to Tomos, the boy of the house.  With the help of the clockwork crow that she discovers in the package, Seren sets out to find out what happened to Tomos and to rescue him.
This fantasy is a quick read making it stand out from all the really long fantasy books out there now.  At under 200 pages, this is a great choice for younger middle grade readers who want fantasy stories but aren't quite ready for the really long ones.  The story is well-told, moves at a brisk pace, and has some fun characters.  Seren is easy to root for especially her determination to solve the puzzle she is presented with.  The clockwork crow adds humor and spice to the story providing the help that Seren needs to face her challenges.  A fun fantasy book for young readers who enjoy stories about mysterious old mansions and crotchety old crows.
NOTE: Cybils nominations are still open and this one hasn't been nominated yet!  Visit this website to nominate some great kids books.
2020 books middle grade fantasy Middle Grade Speculative