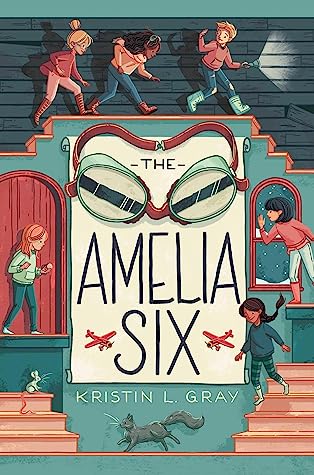 THE AMELIA SIX
by Kristin L. Gray
Paula Wiseman Books, 2020
ISBN : 9781534418851
Source: ARC from publisher for review
Ages 9-12
All opinions expressed are solely my own.
ABOUT THE BOOK
Amelia Earhart’s famous aviator goggles go missing and eleven-year-old Millie has to find them before the night is over in this girl-powered middle grade whodunit.
Eleven-year-old Amelia Ashford—Millie to her friends (if she had any, that is)—doesn’t realize just how much adventure awaits her when she’s given the opportunity of a lifetime: to spend the night in Amelia Earhart’s childhood home with five other girls. Make that five strangers. But Millie’s mom is a pilot like the famous Amelia, and Millie would love to have something to write to her about…if only she had her address.
Once at Amelia’s house in Atchison, Kansas, Millie stumbles upon a display of Amelia’s famous flight goggles. She can’t believe her good luck, since they’re about to be relocated to a fancy museum in Washington, DC. But her luck changes quickly when the goggles disappear, and Millie was the last to see them. Soon, fingers are pointing in all directions, and someone falls strangely ill. Suddenly, a fun night of scavenger hunts and sweets takes a nosedive and the girls aren’t sure who to trust. With a blizzard raging outside and a house full of suspects, the girls have no choice but to band together. It’s up to the Amelia Six to find the culprit and return the goggles to their rightful place. Or the next body to collapse could be one of theirs.
REVIEW
Millie Ashford arrives at Amelia Earhart's birth home in the middle of a snow storm in a turkey truck after her father's car ends up in a ditch.  It doesn't seem like an auspicious start.  The other five girls who have been invited to stay the night leave her feeling a bit out of place and anxious.  Wren and Robin, the twins run their own YouTube channel that's made them famous.  Thea loves science and comes from a family of engineers. Nathalie loves animals and her mother is a scientist in Antarctica.  Cassie's mother works for NASA and Cassie is a foodie herself.  Millie loves Rubik's cube and has won contests but struggles with anxiety.  The girls have come to Earhart's house at the invitation of the Ninety-Nines, the female pilot's organization that Earhart helped found.
What the girls didn't expect was for a mystery to rear its head leaving them at the mercy of four strangers.  A famous pair of Amelia's goggles disappear leaving everyone in the house under suspicion.  Who could have taken them?  Is is one of the girls or one of the adults?  Could Birdie the docent, Collin, her nephew and taxidermist, Edna, the housekeeper, or Chef Perry have a reason to take them?  While suspicious of each other at first, the girls come together to solve the mystery.  But some surprising bits of information, a secret passage, a lost pet rat, and lights that keep going off complicate things.  And it turns out someone is willing to make threats to get his/her way.
The Amelia Six is a fabulous STEM-oriented mystery full of great characters and interesting twists and turns.  I wasn't sure if the mystery would last the whole book, after all the number of suspects is limited to the people in the house.  But I found the mystery kept my interest all the way to the end.  The girl's ingenuity was great with each girl contributing her strengths.  Millie, surprisingly even to herself, takes a leading role.  The adults keep trying to stop the girls from investigating but they persist.  Gray does a great job spacing out the reveals and twists and turns with some real surprises along the way.  I was left wondering who was guilty all the way to the end, which for me is always a sign of a well-constructed mystery.  I highly recommend this very well done mystery.  With intriguing well-developed characters, an interesting setting and mystery, and some great science concepts integrated, The Amelia Six is a winner of a book.
2020 books 2020 favorites middle grade contemporary Middle Grade Mystery