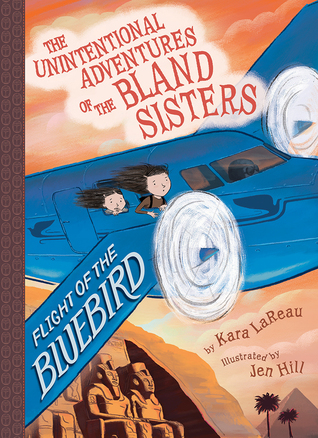 FLIGHT OF THE BLUEBIRD
The Unintentional Adventures of the Bland Sisters #3
by Kara LaReau, illustrated by Jen Hill
Amulet Books, 2019
ISBN: 978-1-4197-3144-0
Source: publisher for review
Ages 8-12
Middle grade historical adventure
All opinions expressed are solely my own.

Fasten your seat belts for some unexpected turbulence ahead, as Jaundice and Kale Bland are back for their final unintentional adventure! Now that they’ve returned from the Uncanny Valley to find their home in Dullsville in absolute shambles, the sisters are rescued by high-flying aviatrix Beatrix Airdale. This time, they’re jetting off (literally) to Egypt to uncover the mysteries of a magical scarab.  By way of Casablanca and after foiling multiple attacks along the way (thanks to Jaundice’s nautical knot-tying skills and Kale’s super-sleuth powers of observation), the Bland Sisters are reunited with their parents. But it turns out that Mom and Dad aren’t as bland—or as “Bland”—as Jaundice and Kale remember. Thanks to their mother’s old archeology notebook, the Bland Sisters uncover their parents’ real identities and help them achieve victory in one final, family-filled adventure.

Jaundice and Kale Bland aren't the adventurous type, at least they didn't used to think so.  But that was before they were kidnapped by pirates and solved a mystery on a train.  And now they are on the ultimate adventure as they set off to find their parents in Egypt.  Naturally they run into plenty of trouble along the way, not the least of which is Jaundice's air sickness.  And once the girls and their companion reach Egypt there is the matter of finding and rescuing their parents.  Once again, LaReau has written a wryly amusing story full of unexpected twists and turns and funny reactions from the girls and their companions.  I appreciated LaReau's taking the time to research her subject before deliberately fictionalizing things for the sake of the story.  This is a fun series for those who enjoy stories with a wry twist and rather atypical characters.


Kara LaReau was an editor at Candlewick Press prior to becoming a full-time writer. She has published many acclaimed picture books for children including Ugly Fish, Rabbit & Squirrel, and Otto: The Boy Who Loved Cars. Kara lives in Providence, Rhode Island, with her husband and son and their two cats. Find out more at karalareau.com.

Writing Flight of the Bluebird, the final story in the Unintentional Adventures of the Bland Sisters middle grade series, was a particular challenge — and not just because it’s the third story in the trilogy, so I felt extra pressure to go out with a bang. Flight of the Bluebird is the only story of the three set in a real place —Luxor, Egypt, for the most part—with a real (and very rich) culture and history, all of which I wanted to present in an accurate and respectful way. So how did I get this bird off the ground?

First, I did a lot of research. I wanted the story to be an homage to Indiana Jones adventures (with a bit of Casablanca thrown in for good measure), so I watched and re-watched those movies and took lots of notes. I also researched: Ancient Egyptian history, tombs in the Valley of the Kings, archaeology in the 1920s-1930s, Egyptian hotels and tourism in the 1930s, and local customs and foods. That was just to start. When it was time to really get down to the business of writing the story, I knew, without having traveled to Egypt, that I was going to need expert help. Fortunately, I found it very close by.

James Allen, Wilbour professor of Egyptology at Brown University and past president of the International Association of Egyptologists, generously volunteered his time and energy to talk with me and review all-too-rough drafts of my manuscript. Professor Allen provided information about the logistics of traveling in Luxor, modern archaeology and the ethics of its practice, and fascinating details of Ancient Egypt, many of which I used, and some of which I fictionalized. Professor Allen’s wife, Susan, also a well-traveled historian, lent me her expertise as well. I am grateful for their wisdom, and for the fact that they happen to live just a few blocks away from me here in Providence, Rhode Island!

There is quite a bit of air travel in Flight of the Bluebird (as its title suggests), and I wanted to make sure that the flight sequences and bits of trivia were correct. A friend referred me to local pilot Allyn Copp, who reviewed all of the aeronautical details. In addition, I read biographies and watched documentaries about Amelia Earhart, Bessie Coleman, and Nellie Bly, all of whom inspired the character of Beatrix Airedale, the aviatrix/action hero the Bland Sisters encounter in this story. Those ladies’ lives were more interesting than any story anyone could write, so I definitely recommend you check them out.

I’d like to believe I rose to the challenge I set for myself with this story, and that readers will find Flight of the Bluebird authentic and respectful and vibrant with detail, as well as a fitting ending to this quirky series; getting there was its own unintentional adventure!
2019 books Author Guest Post middle grade adventure middle grade historical fiction Middle Grade Speculative