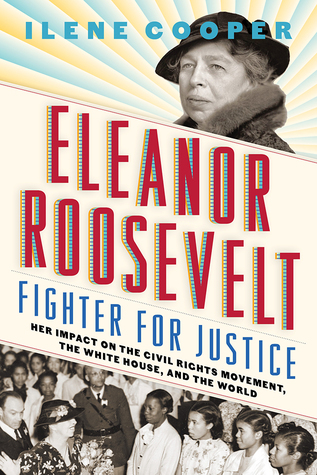 ELEANOR ROOSEVELT
Fighter for Justice
Her Impact on the Civil Rights Movement, the White House, and the World
by Ilene Cooper
Abrams Books for Young Readers, 2018
ISBN: 978-1-4197-2295-0
Source: purchased
Ages 12-16
All opinions expressed are solely my own.

Eleanor Roosevelt, Fighter for Justice shows young readers how the former First Lady evolved from a poor little rich girl to a protector and advocate for those without a voice. Though now seen as a cultural icon, she was a woman deeply insecure about her looks and her role in the world. But by recognizing her fears and constantly striving to overcome her prejudices, she used her proximity to presidents and her own power to aid in the fight for Civil Rights and other important causes. This biography gives readers a fresh perspective on her extraordinary life. It includes a timeline, biography, index, and many historic photographs.

This well-written biography focuses on the work that Eleanor Roosevelt did in helping fight social injustice.  Eleanor's life starting with her birth and continuing up through her death is covered.  But the focus is on her evolving feelings and work related to civil rights, women's rights, and other social justice causes.  Her family life is described including references to her complicated relationship with her husband, Franklin Delano Roosevelt and her troubled relations with her children.  I found it fascinating to read about how her opinions about things changed over time and how it influenced her actions.  The way she stepped forward to help in causes she believed in at a time when women weren't supposed to be so active and involved is admirable.  But Cooper doesn't hesitate to point out weaknesses in Eleanor's beliefs and actions both related to her family and her public actions.  A thought-provoking look at a woman who despite her weaknesses stepped up and made a difference at a time when many Americans were suffering. 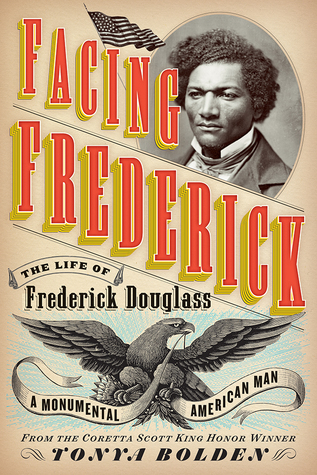 FACING FREDERICK
The Life of Frederick Douglass, A Monumental American Man
by Tonya Bolden
Abrams Books for Young Readers, 2018
ISBN: 978-1-4197-2546-3
Source: purchased
Ages 12-16
All opinions expressed are solely my own.

Frederick Douglass (1818–1895) is best known for the telling of his own emancipation. But there is much more to Douglass’s story than his time spent enslaved and his famous autobiography. Facing Frederick captures the whole complicated, and at times perplexing, person that he was. Statesman, suffragist, writer, and newspaperman, this book focuses on Douglass the man rather than the historical icon.

This beautifully designed book tells the story of an historical icon in a way that makes him come to life.  Quoting from Douglass's own works as well as newspapers and letters and other documents, Bolden tells Douglass story in a way that young adult readers will find engaging and informative.  The numerous photographs of Douglass as well as images of newspapers and letters help bring the story to life.  The book focuses on Douglass's public life although his family life is included.  I found it fascinating to read about aspects of Douglass's life that I wasn't familiar with as well as stories I had heard before.  An important and well done biography of a man who left his mark on the world in many important ways.
Cybils YA biographies