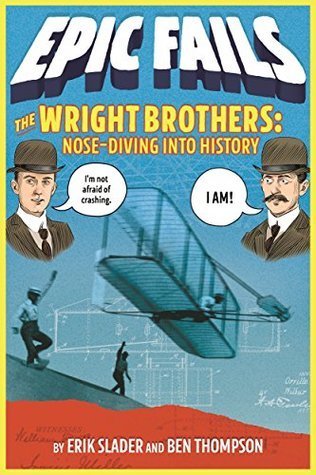 Although Orville and Wilbur Wright are celebrated today as heroes for their revolutionary contributions to science and engineering—they are acknowledged as the first men to successfully achieve powered, piloted flight—their success was hard-earned. (Spoiler alert: there were a lot of nosedives involved.) In fact, it took the self-taught engineers years of work and dozens of crashes before they managed a single twelve-second flight!

In this first installment of the brand new Epic Fails series, Ben Thompson and Erik Slader take readers through the Wright brothers' many mishaps and misadventures as they paved the way for modern aviation.

The Epic Fails series takes a humorous and unexpected view of history, exploring the surprising stories behind a variety of groundbreaking discoveries, voyages, experiments, and innovations, illustrating how many of mankind's biggest successes are in fact the result of some pretty epic failures.

Finding history books that young readers will pick up and read on their own can sometimes be a challenging task for me as a librarian. I am always thrilled when I find a book that is not only nonfiction, but has tremendous child appeal.  Slader and Thompson's new series, Epic Fails, is one such work.  The book is written in an appealing, narrative style that focuses on the most interesting aspects of the story they are telling.  This helps the book move right along, which is important for most young readers who prefer lots of action.  This volume in the series focuses on the Wright Brothers and their work on flight.  After giving a brief introduction to the work done by many in trying to get humankind into the skies, Slader and Thompson focus on the actual physical experiments that the Wright brothers performed.  While the background work the brothers had to perform to get their gliders built is described briefly, the flights the brothers attempted are the focus.  The book ends up being an easy-to-read retelling of the many failures that occurred before the brothers finally found success.  This is a great series for young history buffs and even reluctant readers. The photographs and illustrations break up the text nicely making for a much less intimidating read. 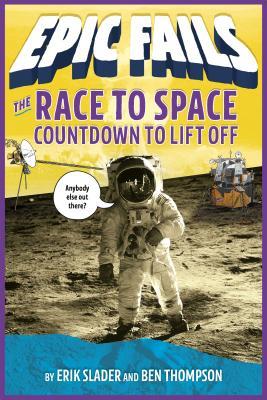 In this second installment of the Epic Fails series, explore the many failures that made up the Race to Space, paving the way for humanity’s eventual success at reaching the stars.

Today, everyone is familiar with Neil Armstrong’s famous words as he first set foot on the moon: “one small step for man; one giant leap for mankind.” He made it look easy, but America’s journey to the moon was anything but simple. In 1957, when the Soviet Union launched Sputnik, the world’s first satellite, into orbit, America had barely crossed the starting line of the great Space Race. Later that year, our first attempt was such a failure that the media nicknamed it “Kaputnik.” Still, we didn’t give up. With each failure, we gleaned valuable information about what went wrong, and how to avoid it in the future. So we tried again. And again. And each time we failed, we failed a little bit better.

The Epic Fails series by Erik Slader and Ben Thompson explores the humorous backstories behind a variety of historical discoveries, voyages, experiments, and innovations that didn't go as expected but succeeded nonetheless, showing that many of mankind's biggest success stories are the result of some pretty epic failures indeed.

As the 50th anniversary of the landing on the moon approaches, there are numerous books being published on the topic.  This one works well for young nonfiction lovers who aren't ready for more detailed accounts.  The authors give a brief description of the circumstances that lead to the space race between the United States and the Soviet Union.  This provides context for the operations that followed including the Mercury, Gemini, and Apollo missions.  Both failures and successes are described. The photographs were appreciated and the illustrations added humor to the book.  It works really well for the age-range it is aimed at.  The only issues I had with it were not enough references, and the incorrect quote attributed to Neil Armstrong when he landed on the moon.  But since the quote is wrong in many available sources it isn't surprising that it's wrong here too.
Favorite Nonfiction history middle grade nonfiction