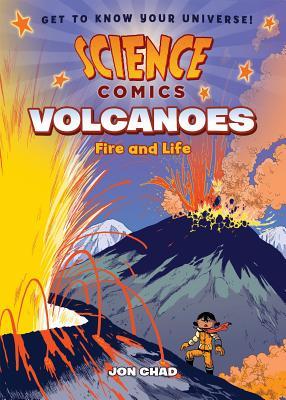 Get ready to explore the depths of the ocean, the farthest reaches of space, and everything in between! Volcanic eruptions, vampire bats, feathered velociraptors, and more await you in SCIENCE COMICS.

In a not-so-distant future our world is as cold as a frozen burrito. But can humanity save itself by harnessing a power that dwells inside the Earth? Explode into the world of geology in Volcanoes: Fire and Life!

A lot of magic happens under the Earth's crust. Thanks to magma vents, shifting continental plates, and volcanic eruptions, we know that our planet is alive and in motion. Alongside Aurora, a young explorer, you'll learn that volcanoes are just one of the massively powerful forces at work on our planet. From catastrophic destruction to the creation of new land masses, volcanoes have made their mark on our amazing Earth.

This book is an unusual mix of fiction and nonfiction.  The story revolves around a young girl named Aurora, her brother and sister, and their teacher Dallas.  They live on an icebound earth that requires them to spend much of their time looking for fuel to burn to keep their tribe alive.  On one such trip, they find their way into a city where they come across a library.  In the basement of the library, they discover a bunch of books which they are excited to report as fuel.  But they do take the time to scan each book into their computer so the knowledge isn't lost when the books are burned.  While doing this, Aurora comes across a book about volcanoes which interest her so much that she sneaks off and reads it.

The rest of the book is a combination of story and fact.  Aurora is so excited about what she's read and the possibilities for helping her tribe that she tells her companions all about what she has learned.  The reader then learns about types of volcanoes, how they are made, types of eruptions, and other interesting facts about volcanoes. But Aurora's excitement about volcanoes makes her a bit careless of her responsibilities and leads to the others getting really mad at her.  And the computer keeps blocking her from accessing additional information.   This Science Comics series is a fun way for young readers to learn about real life topics combined in a format that they love.  The story mixed with the facts can be interesting.  Although I would have liked more background about the characters and their situation.  I was a bit confused at times.  But this won't stop children from enjoying the book. 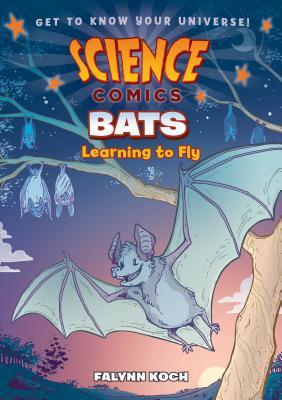 In Bats, we follow a little brown bat whose wing is injured by humans on a nature hike. He is taken to a bat rehabilitation center where he meets many different species of bats. They teach him how they fly, what they eat, and where they like to live.

Every volume of Science Comics offers a complete introduction to a particular topic—dinosaurs, coral reefs, the solar system, volcanoes, bats, flying machines, and more. These gorgeously illustrated graphic novels offer wildly entertaining views of their subjects. Whether you're a fourth grader doing a natural science unit at school or a thirty year old with a secret passion for airplanes, these books are for you!

I really quite enjoyed this entry in the Science Comics series.  The combination of a fictional story about a young bat who is injured by a human tourist with factual information about bats makes for an interesting read.  The efforts of a young girl and a vet to help the young brown bat heal complement the interactions of the different kinds of bats.  Lots of fascinating information about bats, how they fly, what they eat, where they live, provides plenty of great facts for eager young readers.  The graphics are attractive and accurate, including the scenes with the bats interacting (shown right-side up, but clearly shown as upside down).  For students who enjoy graphic novels and learning about interesting factual topics this series is a great boon.  This series is also a great way to encourage students who favor either fiction or nonfiction into expanding their horizons.