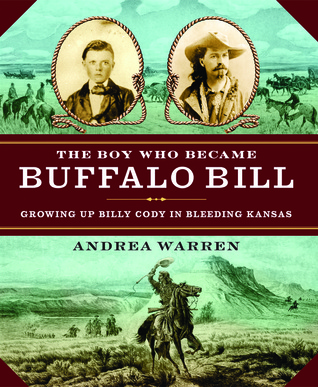 It's interesting reading two biographies of the same person one right after the other.  I found the contrast in presentations quite interesting as well as the one being more complete and detailed than the other.  Warren was much more willing to believe Cody's own words, while Fleming spends time in her book pointing out the controversies that still rage to this day about how much of Cody's autobiographies are fact and how much is fiction.  I highly recommend both books as fascinating, well-written narrative nonfiction reads.

The greatest entertainer of his era, Buffalo Bill was the founder and star of the legendary show that featured cowboys, Indians, trick riding, and sharpshooters.

But long before stardom, Buffalo Bill—born Billy Cody—had to grow up fast. While homesteading in Kansas just before the Civil War, his family was caught up in the conflict with neighboring Missouri over whether Kansas would enter the Union as a free or slave state.

To support his family after a pro-slaver killed his father, Billy—then eleven—herded cattle, worked on wagon trains, and rode the Pony Express. As the violence in Bleeding Kansas escalated, he joined the infamous Jayhawkers, seeking revenge on Missouri­ans, and then became a soldier, scout, and spy in the Civil War—all by age seventeen.

Award-winning author Andrea Warren brings to life the compelling childhood of an adventurous, determined boy who transformed himself into a true American icon.

Warren herself points out in the author's note at the end of the book that her focus here was not entirely on Buffalo Bill, but on Bleeding Kansas and the events surrounding Kansas's statehood.  And seeing as William Cody spent part of his childhood as well as his teenage years in Kansas at that time, he made a great way to tell the story of what was going on in Kansas at that time.  Using Cody's own words as well as those of other family members and witnesses, Warren does a great job of sharing the tensions and conflict that boiled over into bloodshed and terror after Congress gave Kansans the right to decide whether to be a free or slave state.  After the death of his older brother, Cody and his family set off for Kansas looking for a place to prosper and forget.  But none of them forsaw the conflict that would invade their lives.  The invasion of Kansas by slaveholders from Missouri and elsewhere clashed with Cody's father's beliefs and when that became known Cody's father was stabbed.  While Isaac Cody survived the stabbing, his stance on slavery forced him away from his family in order to protect them and his family struggled without him.  Within three years, Isaac would be dead and Billy would be left at the age of 11 to be the man of the house.  But his own restless, wandering nature made it a struggle to stay home.

Written in a compelling style, often times using direct quotes from Billy himself as well as his sister, Julia, and other witnesses, The Boy Who became Buffalo Bill, focuses on Billy's youth, the years leading up to Bleeding Kansas and the events surrounding Billy's life there.  While the author does get into his adult life a bit at the end, the focus here is on his teenage years, his involvement in outlaw raids during the Civil War, and his service in the Union Army.  It's clear that Warren is more trusting of Cody's own words than many others, and Cody was known to exaggerate and even make things up which makes it hard to know how much of his own version of his life was actually true.  But regardless, Warren presents a compelling read, leaving it to the reader to accept or reject Cody's version of events. 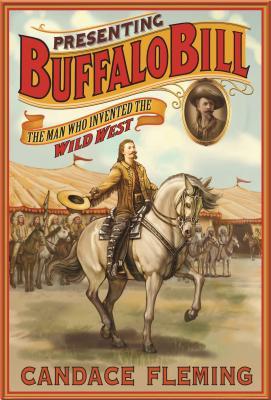 Everyone knows the name of Buffalo Bill, but few these days know what he did or, in some cases, didn't do. Was he a Pony Express rider? Did he ride with Wild Bill Hickok? Did he "scalp" countless Native Americans, or did he defend their rights?

This, the first significant biography of Buffalo Bill Cody for younger readers in many years, explains it all. With copious archival illustrations and a handsome design, PRESENTING BUFFALO BILL makes the great showman—perhaps our first true global superstar—come alive for new generations.

Candace Fleming has once again written an absolutely compelling biography.  She has chosen a man who lived an interesting life, if not devoid of conflict and controversy.  It can be challenging knowing how to handle such controversies as those that swirl around Buffalo Bill Cody.  In my opinion, Fleming has done a superb job of sharing stories and experiences while still highlight problems that have been found with the stories Cody told about his own life.  Memoirs can be problematic to begin with since all the stories in them are told from that person's point of view and not necessarily from a factually accurate standpoint.  Buffalo Bill was especially well-known for exaggerating the stories he told, even in his autobiographies.  And some of his stories seem to be fiction altogether seeing as they contradict what others have recorded and what the historical record reveals.

But using the stories that can be verified from Cody's perspective as well as the words of family members and other witnesses, Fleming has still managed to create an incredibly compelling biography of a complex individual.  There were times as I read that I liked Buffalo Bill and times when I did not.  Buffalo Bill definitely made his share of bad choices in his life and was very much human.  The legends that surround Cody are pushed aside and the reader is given a chance to see him as a man of the times, a man with a gift for storytelling, but who felt little if any guilt at exaggerating or inventing accomplishments.  He was the consummate showman who was willing to hire both women and Native Americans for his show at a time when few did.  Fleming doesn't shy away from the questions about whether Cody manipulated and used the Native performers but she puts the questions in context which I really appreciated.  All in all, Fleming has created the kind of biography that I especially enjoy, one that shows the real person, flaws and all.