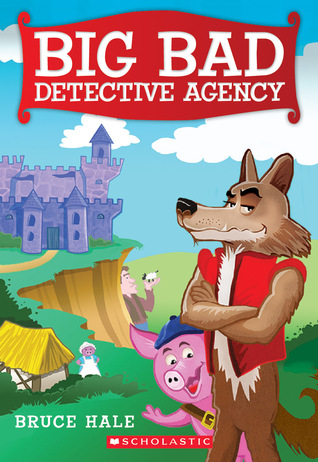 From the comic genius behind CHET GECKO comes a new kind of fairy tale hero -- and a big, bad, crime-solving adventure!

The houses of all Three (not-so-) Little Pigs were broken into and ransacked, and the Pigs are squealing for justice. So Prince Tyrone, ruler of Fairylandia, drags in the obvious suspect: Wolfgang.

The lone wolf has big teeth, sharp claws, no alibi -- and a single day to find the real culprit and clear his big bad name. When Wolf (reluctantly) teams up with the fourth Little Pig to crack the case, the Big Bad Detective Agency -- and an adventure way funnier than your average fairy tale -- is off to a howling start!

I've read many fractured fairy tales, even fractured fairy tale mysteries, but none quite like this one.  The tongue-in-cheek tone of the narrator add to the humor of this tale of misunderstandings and a fairy tale world that is much more gray than black and white.  When Wolfgang (the big, bad wolf) is accused of trashing the houses of the three 'little' pigs, he is given until sundown to prove his innocence.  With a tag along fourth little pig and his own rather doubtful detecting skills, he sets out to find the real guilty party.  The details here were funny, with Cinderella turning out to be rather bossy and hard to live with and Hansel and Gretel being part time burglars (they did eat a witch's house after all), I found it amusing to try to figure out who really did the deed.  I figured out the answer quite early, but younger readers aren't as likely too, although there are clues provided in the text for them to catch onto if they are paying attention.  This book has more than enough silliness to be funny while still providing enough mystery to be intriguing.
Early Chapter Books Fractured Fairy Tales primary humor