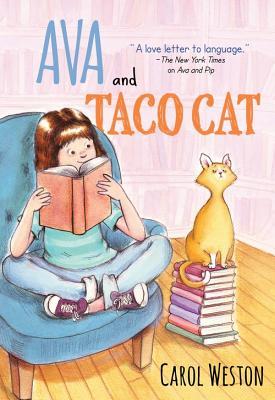 Ava desperately wants a pet for her eleventh birthday-but gets way more than she bargained for when she adopts T-A-C-O-C-A-T.

When Ava Wren hears about an injured yellow tabby with mismatched ears, she becomes obsessed and wants to rescue him. She even picks out a perfect palindromic name: T-A-C-O-C-A-T. But when Taco joins the family, he doesn't snuggle or purr-all he does is hide. Worse, Ava's best friend starts hanging out with Zara, a new girl in fifth grade. Ava feels alone and writes an acclaimed story, "The Cat Who Wouldn't Purr." What begins as exciting news turns into a disaster. How can Ava make things right? And what about sweet, scared little Taco?

I enjoyed reading more about Ava and her family.  When Ava's mother tells her about an injured cat Ava desperately wants to adopt it.  But she struggles once Taco joins the family since he spends most of his time hiding from them.  In addition she struggles with maintaining her friendship with Maybelle and feels she is losing her best friend to the new girl Zara who can't seem to mind her own business.  But once again Ava uses her writing to help herself cope with her problems.  Unfortunately, her writing once again threatens something she holds dear and she is faced with choosing to do the right thing or what her heart wants.

Carol Weston has once again opened a window into the heart and mind of an 11-year-old girl who's growing up whether she wants to or not.  I really liked Ava's thoughts and the wordplay that fills the book, including onomatopoeia, palindromes (like T-A-C-O-C-A-T), and alliteration. Truly, this is a book that many young readers will be able to relate to. Highly recommended.

Authors often struggle with plots and with how exactly to “enter” a book. With AVA AND TACO CAT, I was lucky that the initial barebones plot came easily.

Two years ago, I was spreading out my towel by Windmill Lake in Armonk, a suburb where I grew up just north of New York City. It was a beautiful day and a neighbor who plays summer volleyball with my husband walked over and I asked about her two daughters. “Does Cara still want to be a vet?” I said.

Paula answered, “Yes, but last week someone brought an injured cat into the clinic where she works, and omigod, Cara took it home! It’s the last thing she needs! The poor cat had a gash on its neck and…”

Maybe it’s because I’m a cat person, or maybe it’s because my character’s mom
works for a vet named Dr. Gross, but next thing you know, my imagination was running wild – and I was chasing after it. I don’t think I even heard the update about her second daughter, Danielle. I was already picturing my character, Ava, begging her parents to let her keep an injured little cat. But what would happen if they said yes?

When I finished writing AVA AND TACO CAT (note the palindrome!), I wondered why I’d never put a cat in any previous books. I mean, there are plenty of novels about a-boy-and-his-dog, and it made sense that I’d want to write about a-girl-and-her-cat. When I was a preteen, I probably spent as much time with my cat and my diary than with any one particular person.

As for my current rescue cat, Mike, he’s more bad-ass than purr-ball. He likes affection only on his terms, and I wonder if he noticed that last year, I was observing him extra closely and sometimes even took notes on his behavior or the twitch of his tail.

By the way, my editor, Steve Geck, and illustrator, Victoria Jamieson, both have rescue cats too. We all adopted them from PetCo!

Of course this new novel is not just about a rescue cat. It’s about how fifth-grade friendships can feel both fragile and rock solid. And as with the first book in the series, AVA AND PIP, it’s about the power of writing. Ava is a word nerd (in the best way) who likes to write more than she likes to read, and although she is learning to write better and better, sometimes her writing gets her into big trouble.

One great thing about writing kids’ books: I can get my characters into boiling hot water—and get them safely out again.

THANKS TO CAROL FOR APPEARING ON MY BLOG!