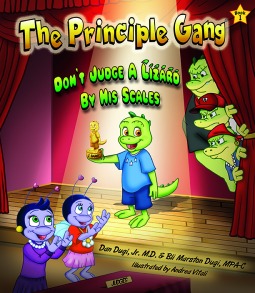 Everyone knows that lizards eat flies, but Bli the Fly and Danny the Wizard Lizard are willing to put their differences aside to become the best of friends.

Dr. Dan and Bli Dugi have a combined 50 years experience as a physician and physician assitant team.  With The Principle Gang series, they have created a way to connect with young children outside of the exam room.  They live in Cuero, Texas, with their daughter, Emmy.  Online at www.ThePrincipleGang.com and @theprinciplegang.

I have mixed feelings about this book.  On the one hand the illustrations are really cute and child friendly, on the other hand the writing focuses too much on the lesson being taught and not enough on the story.  The concept behind the book is a good one, children need reminders of the importance of choosing good friends and standing up for themselves.  The problem I had was with the way the story was told.  The characters didn't speak like real children and there was too much dialogue and not enough description.  The story is pretty much all dialogue which I found a bit confusing. Thankfully the illustrations added a great deal that the story left out, but it makes for a reading experience that isn't as smooth as I would like.   The tips at the back for parents and children were good and I think that most children won't necessarily notice the things that I did.  But when I choose books to read out loud, the text is very important.  I would have a hard time reading this text comfortably out loud. I did notice that the cover doesn't represent the story very well, Danny looks like he is standing on a stage, when he and Bli go to a movie theater and there is no contest for which he could win an award. Overall, the book makes a worthy effort to teach an important lesson, but I would have preferred a stronger sense of story and writing. 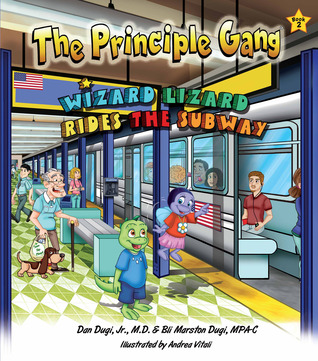 The adventures of Bli the Fly and Danny the Wizard Lizard continue as the best friends take a trip to New York City for an anti-bullying conference.

Wizard Lizard Rides the Subway, Book Two in The Principle Gang Series, finds Danny the Wizard Lizard and Bli the Fly receiving positive attention for their mission to rid the world of bullying. In recognition of their great work, Mrs. Gecko, their school counselor, registers The Principle Gang for an anti-bullying conference in New York City.

Just like in the first book, I found the illustrations cute but the story lacking.  Too much dialogue and not enough description leaves the reader floundering a bit in terms of what is going on in the story.  If the illustrations weren't there to clarify things the reader would be rather lost.  While Danny and Bli make a cute pair of friends, they don't sound like real children, at least not any that I know.  The anti-bullying message is certainly a good one and the steps the authors encourage are good ones: Don't be mean, tell your teacher, be a friend. But the book focuses too much on the message and not enough on the story.  There is really no conflict and little happens other than the trip to the city.  There is certainly potential for this series but the stories need to be stronger.  Although I'm sure that there are children out there who would enjoy these books.
bullying picture books